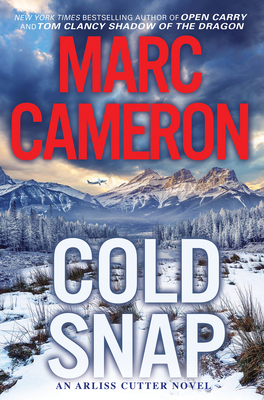 An Action Packed Novel of Suspense (An Arliss Cutter Novel #4)

The bestselling author of the latest Tom Clancy, Jack Ryan novels delivers an adrenaline-filled new thriller featuring Deputy US Marshal Arliss Cutter! Stranded with three violent prisoners in the deadly Alaskan wilderness, Cutter will become the hunter and the hunted…

After an early spring thaw on the Alaskan coast, Anchorage police discover a gruesome new piece of evidence in their search for a serial killer: a dismembered human foot.

In Kincaid Park, a man is arrested for attacking a female jogger. Investigators believe they have finally have their suspect. But one deputy is sure they have the wrong man.

In the remote northern town of Deadhorse, Alaska, Supervisory Deputy US Marshal Arliss Cutter escorts four very dangerous handcuffed prisoners onto a small bush plane en route to Fairbanks. Cutter’s expecting a routine mission and a nonstop flight—or so he thinks. When the plane goes down in the wilderness, all hell breaks loose. The prisoners murder the pilot and a guard and torch the plane. But their nightmare’s just beginning. Back in Anchorage, deputy Lola Teariki has traced the dismembered foot to a missing girl—and the serial psychopath who slaughtered her.

It’s one of the prisoners on Cutter’s flight…

Now it’s a deadly game of survival. With no means of communication, few supplies, and ravenous grizzly bears and wolves lurking in the shadows, Cutter has to battle the unforgiving elements while the killer wants his head on a stick. Here in Alaska, nature can be cruel—but this time, human nature is crueler…

“Cold Snap by Marc Cameron is another riveting novel featuring his main character, Deputy US Marshal Arliss Cutter. The author worked in law enforcement as a US Marshal, so he keeps the plot realistic. Cameron puts the reader in the middle of the Alaskan wilderness. They feel the wind at their face, and the bitter cold from the downpour of snow. Animals also become a factor with wolves and an 800-pound grizzly bear trying to get their next meal. There is no means of communication, few supplies, and prisoners who want nothing more than to kill Cutter.  He must use all his skills to protect himself and others found in the wilderness. The plot and characters are enthralling.”
—Military Press

“Bestseller Cameron’s exciting fourth novel featuring quick-thinking Deputy U.S. Marshal Arliss Cutter (after 2021’s Bone Rattle) takes Cutter once again from his home state of Florida to Alaska… Cameron piles on the complications in the thrilling finale, played out in a remote wilderness setting, with an icy storm on the horizon and a hungry 800-pound grizzly looking for his next meal. Well-developed characters complement the nonstop action. Cameron viscerally conveys Alaska’s austere beauty as well as its unexpected dangers.”
—Publishers Weekly

"A double-barreled blast of action, narrative, and impossible-to-fake authenticity with a great sense of place and a terrific protagonist.”
—C.J. Box, #1 New York Times bestselling author

“Cameron, who has nearly three decades in law enforcement and a stint as a U.S. Marshal, keeps all these plot points delicately balanced and the same time creates sympathetic heroes, depraved villains, and nail-biting action. Readers will eagerly await his next.”
—Publishers Weekly, STARRED REVIEW on Open Carry

“Spectacular on all fronts…The action is fast-paced and will have you glued to each page. The way the author describes the austere and beautiful Alaskan landscape makes you feel like you're really there. The protagonist is captivating and the supporting characters each carry the story in their own ways. But perhaps the greatest feather in the cap of this novel is the emotional depth, which brings a rare degree of realness to the novel…Marshall Cutter is everything you'd want in a U.S. Army Ranger-turned-law-enforcement-officer. He's stoic like the star of a Western film, he's crafty like a modern-day Sherlock Holmes, and he always takes the most practical route in stopping criminals…I can honestly say that this novel was one of the best I've read in a good long while and it will keep you hooked—page by page, chapter by chapter.”
—We Are The Mighty on Open Carry

“Set in the vast Alaskan landscape where a small village attempts to keep its dark secrets hidden, Marc Cameron’s Open Carry reads like a cross between Lee Child’s The Killing Floor and C.J. Box’s Blood Trail…and is perfect for fans of both those series.”
—The Real Book Spy

“Cameron effectively combines investigation and straight-ahead action, and he has fashioned a compelling, never-give-an-inch hero who will appeal to Jack Reacher fans. Jump in now for what looks to be a series that thriller fans will follow closely.”
—Booklist on Open Carry

“Intricate, multilayered…Cameron populates his suspenseful tale, which builds to a satisfying, if violent, conclusion, with fully realized characters, each with their own believable backstory. His understanding of the ins and outs of small Alaskan communities makes for a rich sense of time and place. Readers can only hope they won’t have long to wait for Cutter’s third outing.”
—Publishers Weekly on Stone Cross

“If you want to read an exciting mystery, with elements of a thriller, and a hero reminiscent of classic Westerns, Stone Cross is asure thing. I could smell the paint-thinner.”
—Criminal Element

“A nail-biting quality on top of great characterization, a gripping plot, and clean, vivid writing.”
—The New York Journal of Books on Stone Cross

“Cameron draws on his own service as a deputy federal marshal in Alaska...he does a good job balancing the multiple plotlines as well as characterization and action.”
—Publishers Weekly on Bone Rattle

New York Times and USA Today bestselling author Marc Cameron, a native of Texas and now a resident of Alaska, has spent over three decades in law enforcement. He is the award-winning author of the Arliss Cutter and the Jericho Quinn series, as well as the Tom Clancy Jack Ryan Sr. books, starting with Power and Empire in 2017. Early in his career, he served as a uniformed police officer, mounted (horse patrol) officer, and detective before accepting a position with the United States Marshals Service and serving as a Deputy, Fugitive Task Force Commander, Supervisory Deputy, Senior Inspector, and Chief. His assignments have taken him from rural Alaska to Manhattan, from Canada to Mexico and points in between. A second-degree black belt in jujitsu, he often teaches defensive tactics to other law enforcement agencies and civilian groups. Cameron presently lives in Alaska with his wife and his BMW motorcycle. Visit him online at MarcCameronBooks.com.