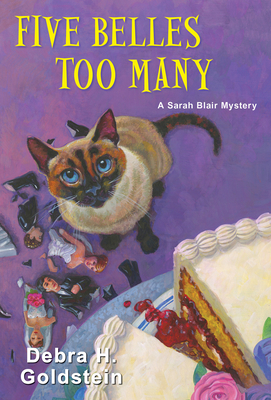 Five Belles Too Many (A Sarah Blair Mystery #5)

In the fifth Sarah Blair Mystery set in Alabama and featuring the culinary-challenged sleuth Sarah Blair, things get a little too real when a murderer crashes a reality competition for brides...

Sometimes Sarah’s mother, Maybelle, can be higher maintenance than her Siamese cat RahRah. Maybelle and her friend, Mr. George Rogers, have been chosen to be one of five couples competing for a small-town “perfect” wedding and dream honeymoon on a Southern Belles reality show—and guess who has to be chaperone. Even more vexing, the producers have decided to put up the crew and participants at the restaurant/bed and breakfast owned by Sarah’s nemesis Jane Clark.

But when someone turns up dead with Jane kneeling by the body with blood on her hands, she goes from being Sarah’s chief rival to the police’s chief suspect. Neither Sarah nor her twin, Chef Emily Johnson, can stand Jane—still, they don’t think she’s a murderer. The producers vow the show must go on, but to protect their mother and the other contestants, Sarah vows to find the true killer before someone else gets eliminated...

Debra H. Goldstein is the author of the Sarah Blair Mysteries, as well as Should Have Played Poker and IPPY Award-winning Maze in Blue. Her short stories, including Anthony and Agatha-nominated The Night They Burned Ms. Dixie’s Place, have appeared in numerous periodicals and anthologies. An active Birmingham, Alabama civic volunteer, Debra also serves on the national boards of Sisters in Crime and Mystery Writers of America and is president of SEMWA and past president of SinC’s Guppy Chapter. Visit DebraHGoldstein.com to learn more.
Loading...
or support indie stores by buying on