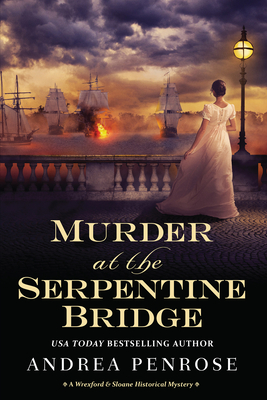 Murder at the Serpentine Bridge

For fans of Bridgerton looking for a mysterious twist on the glittering ballrooms of the Regency—a masterfully plotted story from a USA Today bestselling author that combines engaging protagonists with rich historical detail and international intrigue, plus a touch of romance that readers of Amanda Quick and Deanna Raybourn will savor.

Charlotte, now the Countess of Wrexford, would like nothing more than a summer of peace and quiet with her new husband and their unconventional family and friends. Still, some social obligations must be honored, especially with the grand Peace Celebrations unfolding throughout London to honor victory over Napoleon.

But when Wrexford and their two young wards, Raven and Hawk, discover a body floating in Hyde Park’s famous lake, that newfound peace looks to be at risk. The late Jeremiah Willis was the engineering genius behind a new design for a top-secret weapon, and the prototype is missing from the Royal Armory’s laboratory. Wrexford is tasked with retrieving it before it falls into the wrong hands. But there are unsettling complications to the case—including a family connection.

Soon, old secrets are tangling with new betrayals, and as Charlotte and Wrexford spin through a web of international intrigue and sumptuous parties, they must race against time to save their loved ones from harm—and keep the weapon from igniting a new war . . .

Praise for Murder at the Serpentine Bridge

“Swashbuckling…Historical fans will have fun.”
—Publishers Weekly on Murder at the Royal Botanic Gardens

“For relaxed enjoyment and the diversion of adept time travel, an Andrea Penrose historical mystery is hard to beat!”
—The New York Journal of Books on Murder at the Royal Botanic Gardens

“A bit of Regency-period romance and history enhance a convoluted mystery with plenty of derring-do.”
—Kirkus Reviews on Murder at the Royal Botanic Gardens

“Andrea Penrose is skillful at incorporating the scientific discoveries of the day into her plots.”
—Criminal Element on Murder at the Royal Botanic Gardens

“A nice mix of science, setting, adventure story, and romance. Wrexford and Charlotte are a great pair.”
—Aunt Agatha’s Bookstore on Murder at the Royal Botanic Gardens

“Another delight of the series.”
—Historical Novel Society on Murder at the Royal Botanic Gardens

“Scientific discoveries combine with a complex mystery to provide an action-packed brainteaser.”
—Kirkus Reviews on Murder at Queen’s Landing

“A high-paced adventure with a light feathering of attraction between the protagonists. After all, it’s hard to take time for courting when you’re protecting the people you care for, in the face of a powerful criminal mastermind.”
—The New York Journal of Books on Murder at Queen’s Landing

“An intricately plotted mystery set in Regency England. Its complex story line and authentic historical details bring the early days of the Industrial Revolution vividly to life. Bound to fascinate readers of C.S. Harris and even fans of Victorian mysteries.”
—Library Journal, STARRED REVIEW on Murder at Half Moon Gate

“Penrose does a good job linking the mystery to the period’s scientific and social changes. Those seeking an unusually rich look at Regency life will be satisfied.”
—Publishers Weekly on Murder at Kensington Palace

“Penrose is excellent at conveying the details of early 19th-century science and experiments with electricity. This was the era of Frankenstein, after all. The relationship between Wrexford and Charlotte is further developed in this book, and I am looking forward to seeing where it leads next.”
—Historical Novel Society on Murder at Kensington Palace

“Penrose deftly intertwines the politics of navigating Regency-era society, scientific progress, and the deepening relationship between the protagonists. Series fans will enjoy revisiting the lively cast of characters, while historical fiction readers will be satisfied by the immersive, richly detailed mystery.”
—Library Journal on Murder at Kensington Palace

“Murder at Kensington Palace is a challenging story, replete with scientific discoveries and challenges of the time, but it’s grounded in loyalty, persistence, and courage.”
—Criminal Element

“Science and romance meet in a high-stakes cat-and-mouse game.”
—Kirkus Reviews on Murder at Kensington Palace

"The relationship and banter between the two stars of this series is incredible. Readers will look forward to seeing Charlotte and Wrex again (and hopefully very soon)."
—Suspense Magazine on Murder at Half Moon Gate

“Fans of C.S. Harris take note! In this new, Regency-set mystery series, the artist Charlotte Sloane and the scientist Earl of Wrexford are the perfect mismatched pair of sleuths. A riveting ride through Regency London, from the slums of St. Giles, to the mansions of Mayfair.”
—Lauren Willig, New York Times bestselling author on Murder on Black Swan Lane

“A wonderfully engaging Regency mystery, with a most determined heroine and an engaging pair of street urchins at her side. Historical chemistry meets alchemy, and only a nonchalant nobleman can help solve the murder. A delight of a book.”
—Joanna Bourne, award-winning author on Murder on Black Swan Lane

“A female 19th-Century cartoonist as an amateur sleuth is a welcome innovation.”
—Publishers Weekly on Murder on Black Swan Lane

“Penrose deftly combines a Regency romance with a tricky mystery that delves into social unrest and the darker side of this storied period.”
—Kirkus Reviews on Murder at Half Moon Gate

“Penrose reveals intriguing new aspects of her protagonists’ characters and relationship in a story linked to the era’s technological and social changes.”
—Publishers Weekly on Murder at Half Moon Gate

Andrea Penrose is the acclaimed author of Regency-era historical fiction, including the USA Today bestselling Wrexford & Sloane mystery series, as well as Regency romances written under the names Cara Elliott and Andrea Pickens. Published internationally in ten languages, she is a three-time RITA Award-finalist and the recipient of numerous writing awards, including two Daphne Du Maurier Awards for Historical Mystery and two Gold Leaf Awards. A graduate of Yale University with a B.A. in Art and an M.F.A. in Graphic Design, Andrea fell in love with Regency England after reading Pride and Prejudice, and has maintained a fascination with the era's swirling silks and radical new ideas throughout her writing career. She lives in Connecticut and blogs with a community of historical fiction authors at WordWenches.com. She also can be found at AndreaPenrose.com and on Instagram @AndreaPenroseBooks.
Loading...
or support indie stores by buying on