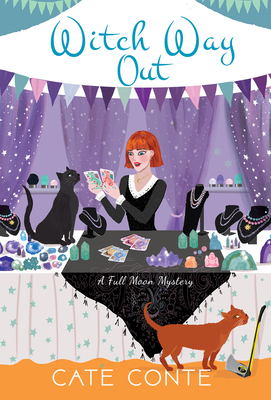 CHARMED meets MURDER, SHE WROTE in Cate Conte’s latest Full Moon Mystery, as an unexpected death completely rocks the Spring Equinox Fair and it’s up to crystal shop owner Violet Mooney to uncover the truth to settle the mayhem.

When Violet Mooney’s coworker and fellow witch calls to say that their Connecticut crystals shop, The Full Moon, has been selected as a vendor at the Spring Equinox Fair, it’s welcome news. Ever since she learned about her magickal ancestry, Violet has been struggling to learn her craft while staying out of trouble. It’s no easy feat when her family seems to be the target of a power-grab within the realm, putting the entire magickal community on edge—and setting Violet on a mission . . .

With her investigation conjuring more questions than answers, Violet tries to focus on the Fair, which is being run by one of her personal heroes. Horatio Hale is a proponent of ethical crystal mining, but apparently not everyone is a fan. Violet is shocked when she goes to attend a meeting and finds Horatio dead—with an axe stuck in his chest. To uncover the motives behind the mayhem in both the mortal and magickal worlds, Violet is going to need more than a crystal ball. And it’ll take all the powers she’s been honing—plus some she didn’t know she had—to save herself . . .

Praise For Witch Way Out (A Full Moon Mystery #3)…

“Zippy and fun, with an otherworldly hook that’s further enhanced by characters with a little magic of their own.” —Kirkus Reviews on Witch Hunt

“Cate Conte casts a winning spell with Witch Hunt, summoning a bit of magic to offset the mysteries and murder at hand. A cozy setting, charming characters, and moments of comic relief all conspire to keep pages the turning; further, the otherworldly elements are handled with subtlety and reverence rather than over-the-toppedness. Consequently, I’m conjuring up a positive prediction for this series: that it will beguile readers for years to come.” —Criminal Element on Witch Hunt

“Witch Hunt gives us a terrible crime, off-page, and then leads us on a journey filled with red herrings, twists, turns, and startling revelations. It is a real page-turner filled with complex characters who have oddly relatable problems.” —Frolic Media on Witch Hunt

“A delightfully charming tale with a quirky cast of characters.” —Dru’s Book Musing on Witch Hunt

Cate Conte is the acclaimed author of the Cat Cafe Mysteries and the Full Moon Mysteries, as well as the Agatha Award nominated Pawsitively Organic Mysteries written under the name Liz Mugavero. She serves on the Sisters in Crime New England board and is a member of Sisters in Crime National, Mystery Writers of America, and the Cat Writers’ Association. She currently lives in Connecticut and can be found online at CateConte.com.
Loading...
or support indie stores by buying on