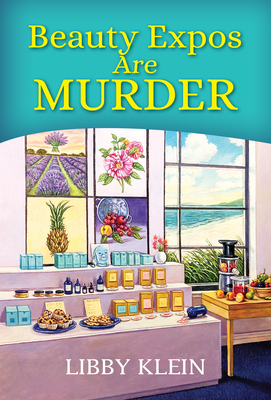 Gluten-free baker Poppy McAllister is about to see the ugly side of beauty expos...

Easter weekend on the Jersey Shore is hopping. Poppy's Bed and Breakfast is busier than ever, but she needs to leave things in the hopefully capable hands of Aunt Ginny--and paws of Figaro the black smoke Persian. She's selling her paleo muffins and keto cookies at the Health and Beauty Expo in Cape May's Convention Hall. Normally sharing a booth with the love of her life would be a treat, but she's recently discovered secrets that throw her new romance into chaos.

But more secrets are about to be exposed at the expo. In his keynote address, prominent cosmetic surgeon Dr. Lance Rubin reveals his breakthrough anti-aging technology. Unfortunately, someone has one-upped him with a truly foolproof anti-aging formula: murder. With the plastic surgeon dead under his own UV mask, and bedlam reigning in the hall and back at the B&B, Poppy needs to follow a twisted trail marked by glowing footprints to unmask a killer...

Libby Klein graduated Lower Cape May Regional High School sometime in the '80s. Her classes revolved mostly around the culinary sciences and theater, with the occasional nap in Chemistry. She has worked as a stay at home mom, climbing the ladder up the ranks to the coveted position of Grandma. She also dabbles in the position of Vice President of a technology company, which mostly involves bossing other people around, making spreadsheets and taking out the trash. A member of Mystery Writers of America and Sisters in Crime, she writes from her Northern Virginia office while trying to keep her cat Figaro off her keyboard. Find her online at LibbyKleinBooks.com.
Loading...
or support indie stores by buying on