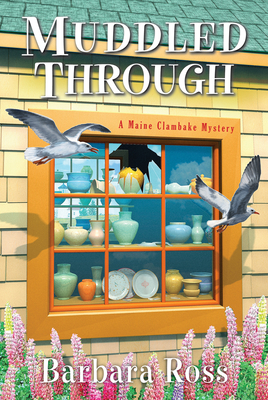 Muddled Through (A Maine Clambake Mystery #10)

In the tenth installment of Barbara Ross’s award-winning mystery series starring Julia Snowden and her family’s coastal Maine clambake business, a heated feud over a proposed pedestrian mall leads to murder--which means it’s up to Julia to clean up the case.

Mud season takes on a whole new meaning in the coastal town of Busman's Harbor, Maine, when local business owners sling dirt at one another in a heated feud over a proposed pedestrian mall. Vandalism is one thing, but murder means Julia Snowden of the Snowden Family Clambake steps in to clean up the case...

When Julia spots police cars in front of Lupine Design, she races over. Her sister Livvie works there as a potter. Livvie is unharmed but surrounded by smashed up pottery. The police find the owner Zoey Butterfield digging clay by a nearby bay, but she has no idea who would target her store. Zoey is a vocal advocate for turning four blocks of Main Street into a pedestrian mall on summer weekends. Other shop owners, including her next-door neighbor, are vehemently opposed. Could a small-town fight provoke such destruction? When a murder follows the break-in, it’s up to Julia to dig through the secrets and lies to uncover the truth...

Barbara Ross is the author of the Maine Clambake Mysteries and the Jane Darrowfield Mysteries. Her books have been nominated for multiple Agatha Awards for Best Contemporary Novel and have won the Maine Literary Award for Crime Fiction. Barbara’s Maine Clambake novellas are included along with stories by Leslie Meier and Lee Hollis in holiday anthologies from Kensington Publishing. Barbara and her husband live in Portland, Maine. Readers can visit her website at BarbaraRossAuthor.com.
Loading...
or support indie stores by buying on