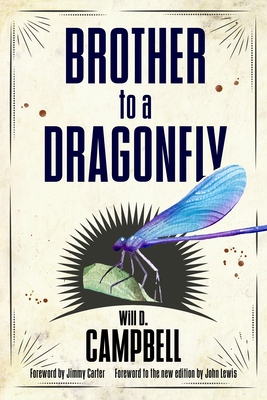 In Brother to a Dragonfly, Will D. Campbell writes about his life growing up poor in Amite County, Mississippi, during the 1930s alongside his older brother, Joe. Though they grew up in a close-knit family and cared for each other, the two went on to lead very different lives. After serving together in World War II, Will became a highly educated Baptist minister who later became a major figure in the early years of the civil rights movement, and Joe became a pharmacist who developed a substance abuse problem that ultimately took his life. Brother to a Dragonfly also serves as a historical record. Though Will's love and dedication to his brother are the primary story, interwoven throughout the narrative is the story of the Jim Crow South and the civil rights movement. Will is present through many of the most pivotal moments in history--he was one of four people who escorted black students integrating the Little Rock public schools; he was the only white person present at the founding of the SCLC; he helped CORE and SNCC Freedom Riders integrate interstate bus travel; he joined Dr. Martin Luther King Jr.'s campaign of boycotts, sit-ins, and marches in Birmingham; and he was at the Lorraine Motel the night Dr. King was assassinated. Will's accomplishments, however, never take the spotlight from his brother, and as his relationship with Joe evolves, so does Will's faith. Featuring a new foreword by Congressman John Lewis, this book brings back to print the combined lives of Will Campbell--Will the brother and Will the preacher.

Will D. Campbell (1924-2013) was a Mississippi-born, Tennessee-based Baptist preacher, activist, author, lecturer, and farmer. Author of over fifteen books, he won the Lillian Smith Prize, Lyndhurst Prize, and an Alex Haley Award; was a finalist for the National Book Award; and received the National Endowment for the Humanities medal from President Bill Clinton.
or support indie stores by buying on
Copyright © 2020 American Booksellers Association