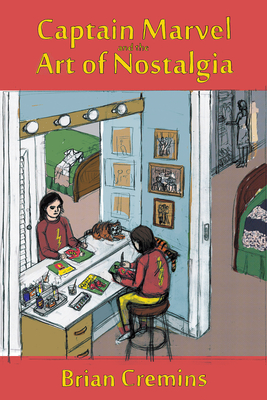 Captain Marvel and the Art of Nostalgia (Paperback)

Billy Batson discovers a secret in a forgotten subway tunnel. There the young man meets a wizard who offers a precious gift: a magic word that will transform the newsboy into a hero. When Billy says, "Shazam ," he becomes Captain Marvel, the World's Mightiest Mortal, one of the most popular comic book characters of the 1940s. This book tells the story of that hero and the writers and artists who created his magical adventures. The saga of Captain Marvel is also that of artist C. C. Beck and writer Otto Binder, one of the most innovative and prolific creative teams working during the Golden Age of comics in the United States. While Beck was the technician and meticulous craftsman, Binder contributed the still, human voice at the heart of Billy's adventures. Later in his career, Beck, like his friend and colleague Will Eisner, developed a theory of comic art expressed in numerous articles, essays, and interviews. A decade after Fawcett Publications settled a copyright infringement lawsuit with Superman's publisher, Beck and Binder became legendary, celebrated figures in comic book fandom of the 1960s. What Beck, Binder, and their readers share in common is a fascination with nostalgia, which has shaped the history of comics and comics scholarship in the United States. Billy Batson's America, with its cartoon villains and talking tigers, remains a living archive of childhood memories, so precious but elusive, as strange and mysterious as the boy's first visit to the subway tunnel. Taking cues from Beck's theories of art and from the growing field of memory studies, Captain Marvel and the Art of Nostalgia explains why we read comics and, more significantly, how we remember them and the America that dreamed them up in the first place.

Brian Cremins is associate professor of English at Harper College. His essays have appeared in the International Journal of Comic Art, Studies in American Humor, the Los Angeles Review of Books, Alter Ego, and in the edited collection Comics and the U.S. South, published by University Press of Mississippi.
or support indie stores by buying on
Copyright © 2020 American Booksellers Association