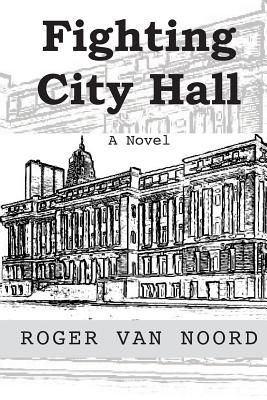 Chasing a mysterious tip about a colorful mayor, Rob Norton is closing in on the biggest story of his newspaper career when he finds himself fighting more than city hall. With the mayor's re-election looming, Norton's story faces nonsensical roadblocks while he deals with dysfunctional newsroom personalities, including his own. Norton continues digging, and yet, a more personal probe, this one by his doctor, grows more significant. Something has gone dramatically wrong. The wheels are coming off his world, and he realizes he is in a race against his own deteriorating body as he veers into uncertainty about career, sex life, and even his daily routine. Fighting City Hall is an ink-stained portrait of an era not too long ago when newspapers were news papers, with breaking news, not a regurgitation of stories printed first online. It was an exciting time to be in a newsroom, where the atmosphere bubbled with crude.

Roger Van Noord worked as a reporter and in various editor positions at the Flint Journal, where he retired as managing editor. Van Noord also is the author of two biographies, "Unleashed: A storyteller's odyssey" and "Assassination of a Michigan King: The Life of James Jesse Strang." He and his wife live in Michigan with an Irish terrier that loves salad fixings and apples.
or support indie stores by buying on
Copyright © 2020 American Booksellers Association