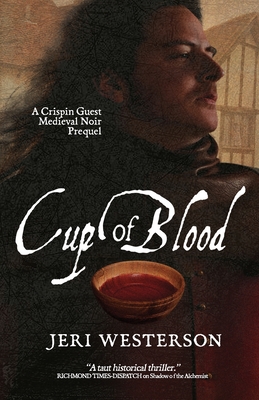 When a corpse turns up at his favorite tavern, Crispin Guest-disgraced knight turned detective--begins an inquiry, but the dead man turns out to be a Templar knight, an order thought to be extinct for 75 years, charged with protecting a certain religious relic which is now missing. Before he can begin to investigate, Crispin is abducted by shadowy men who are said to be minions of the French anti-pope. Further complicating matters are two women: one from court with an enticing proposition, and another from Crispin's past, dredging up long-forgotten emotions he would rather have left behind. And as if all that weren't enough, a cunning young cutpurse by the name of Jack Tucker has insinuated himself into Crispin's already difficult life. The deeper Crispin probes into the murder, the more it looks like the handiwork of an old friend turned adversary. With enemies from all sides, Crispin has his hands full in more than murder in this intriguing prequel to the acclaimed series.Richmond Times-Dispatch says: "Steeped in vivid historical detail, focused on a heroic protagonist and structured toward a shocking and shattering climax, "Cup of Blood" cements Westerson's bona fides as a master of medieval murder." Booklist says: "Westerson paints a murky portrait of a medieval world suitably full of shadowy characters and unexpected twists and turns."Bestselling author Timothy Hallinan, author of the Poke Rafferty Bangkok thrillers says: "CUP OF BLOOD starts like a clap of thunder... Crispin maintains his standing as one of today's (and yesterday's) most engaging private eyes. I loved it "Lesa Holstine, Librarian says: "Crispin Guest and Jack Tucker are the Don Quixote and Sancho Panza of 14th century London, on their own grand adventures to right wrongs and maintain the knight's code of chivalry and honor..."Historical Novel Society Review says: "The author creates a provocative tale...one with an involved plot and an unexpected climax."Cup of Blood finaled for the Bruce Alexander Historical Mystery Award and semi-finaled for the M.M. Bennets Historical Fiction Award.

Los Angeles native and award-winning author Jeri Westerson writes the critically acclaimed Crispin Guest Medieval Noir mysteries. Her books have garnered nominations for the Shamus, the Macavity, the Agatha, Romantic Times Reviewer's Choice, and the Bruce Alexander Historical Mystery Award. Jeri is former president of the southern California chapter of Mystery Writers of America and is a frequent guest lecturer on medieval history at colleges and museums. When not writing, Jeri dabbles in gourmet cooking, drinks fine wines, eats cheap chocolate, and swoons over anything British. www.JeriWesterson.com
Loading...
or support indie stores by buying on