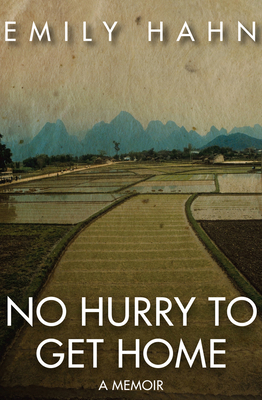 No Hurry to Get Home

A fascinating memoir by a free-spirited New Yorker writer, whose wanderlust led her from the Belgian Congo to Shanghai and beyond. Originally published in 1970, under the title Times and Places, this book is a collection of twenty-three of her articles from the New Yorker, published between 1937 and 1970. Well reviewed upon first publication, the book was re-published under the current title in 2000 with a foreword by Sheila McGrath, a longtime colleague of hers at the New Yorker, and an introduction by Ken Cuthbertson, author of Nobody Said Not to Go: The Life, Loves and Adventures of Emily Hahn. One of the pieces in the book starts with the line, "Though I had always wanted to be an opium addict, I can't claim that as a reason why I went to China." Hahn was seized by a wanderlust that led her to explore nearly every corner of the world. She traveled solo to the Belgian Congo at the age of twenty-five. She was the concubine of a Chinese poet in Shanghai in the 1930s--where she did indeed become an opium addict for two years. For many years, she spent part of every year in New York City and part of her time living with her husband, Charles Boxer, in England. Through the course of these twenty-three distinct pieces, Emily Hahn gives us a glimpse of the tremendous range of her interests, the many places in the world she visited, and her extraordinary perception of the things, large and small, that are important in a life.

A revolutionary woman for her time and an enormously creative writer, Emily Hahn broke all of the rules of the 1920s, including by traveling the country dressed as a boy, working for the Red Cross in Belgium, being the concubine to a Shanghai poet, using opium, and having a child out of wedlock. Hahn kept on fighting against the stereotype of female docility that characterized the Victorian era and was an advocate for the environment until her death at age ninety-two. Emily Hahn (1905-1997) was the author of fifty-two books, as well as one hundred eighty-one articles and short stories for the New Yorker from 1929 to 1996. She was a staff writer for the magazine for forty-seven years. She wrote novels, short stories, personal essays, reportage, poetry, history and biography, natural history and zoology, cookbooks, humor, travel, children's books, and four autobiographical narratives: China to Me (1944), a literary exploration of her trip to China; Hong Kong Holiday (1946); England to Me (1949); and Kissing Cousins (1958). The fifth of six children, she was born in St. Louis, Missouri, and later became the first woman to earn a degree in mining engineering at the University of Wisconsin. She did graduate work at both Columbia and Oxford before leaving for Shanghai. She lived in China for eight years. Her wartime affair with Charles Boxer, Britain's chief spy in pre-World War II Hong Kong, evolved into a loving and unconventional marriage that lasted fifty-two years and produced two daughters. Emily Hahn's final published piece in the New Yorker appeared in 1996, shortly before her death.
Loading...
or support indie stores by buying on