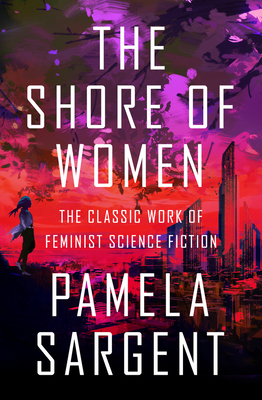 The Shore of Women

A dystopian tale of a power struggle between the sexes in the post-nuclear future, perfect for readers of Margaret Atwood and Ursula K. Le Guin. After a nuclear holocaust, women rule the world. Using advanced technology, they've expelled men from their vast walled cities to roam the countryside in primitive bands, bringing them back only for the purpose of loveless reproduction under the guise of powerful goddesses. When one young woman, Birana, questions her society's deception, she finds herself exiled among the very men she has been taught to scorn. She crosses paths with a hunter, Arvil, and the two grow close as they evade the ever-threatening female forces and the savage wilderness men. Their love just might mend their fractured world--if they manage to survive. Hailed as "one of the genre's best writers" by the Washington Post Book World, Pamela Sargent is the author of numerous novels, including Earthseed and Venus of Dreams. The winner of the Nebula and Locus awards, she has also coauthored several Star Trek novels with George Zebrowski.

Pamela Sargent has won the Nebula and Locus Awards and was honored in 2012 with the Science Fiction Research Association's Pilgrim Award, given for lifetime contributions to science fiction and fantasy scholarship. Her many novels include Venus of Dreams, The Shore of Women, The Golden Space, The Sudden Star, and The Alien Upstairs. About Ruler of the Sky, Sargent's historical novel of Genghis Khan, told largely from the points of view of women, Elizabeth Marshall Thomas has commented: "Scholarly without ever seeming pedantic, the book is fascinating from cover to cover and does admirable justice to a man who might very well be called history's single most important character." The Washington Post has called Sargent "one of the genre's best writers," and Michael Moorcock has said of her work: "If you have not read Pamela Sargent, then you should make it your business to do so at once. She is in many ways a pioneer, both as a novelist and as a short story writer. . . . She is one of the best." Sargent is the editor of the Women of Wonder anthologies, the first collections of science fiction by women. Her novel Climb the Wind, set in the United States after the Civil War, was a finalist for the Sidewise Award for Alternate History, and her novel Earthseed has been optioned by Paramount Pictures. Melissa Rosenberg, the scriptwriter for all five Twilight films, is set to write and produce the movie through her company Tall Girls Productions.
Loading...
or support indie stores by buying on