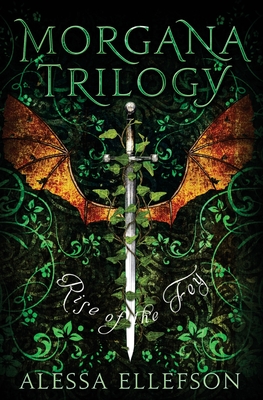 Rise of the Fey

The second book in the exciting Morgana Trilogy When Morgan was sent to her family home in Fond-du-Lac, Wisconsin, a small part of her had hoped that it meant she would finally get the family life she'd always dreamed of. Instead, she was propelled into another world under Lake Winnebago where kids like her are trained to become knights in a millennia-old fight against the Fey.Now, after having been an unwilling key to liberating Carman, the worst she-demon of modern times, Morgan finds herself locked up in jail. All because of what her parents were. But Morgan's done with playing nice and following orders-not that she was ever that good at it-and it's high time she took her own destiny into her own hands. Before the knights execute her, and certainly before Carman destroys the whole world in her rage.

Alessa Ellefson is a woman of all sorts - she loves to tell all sorts of stories to all sorts of people in all sorts of places. From sun-soaked California to regular-soaked Belgium, she has left a trail of giants, fairies, battles, and magic in the thoughts of her followers and dozens of recycle bins. Blood of the Fey, her first published novel and the first in the Morgana Trilogy, was written at coffee shops between a day job in finance and nights of "research" on Korean dramas. Rise of the Fey is the sophomore entry in the series and was finished in winter-time Brussels, where the pounding rain soothed the rambunctious temper that inevitably arose after long editorial hours. You can find out more about Alessa's writings via her website at www.alessaellefson.com, and get other extras through her newsletter.
Loading...
or support indie stores by buying on