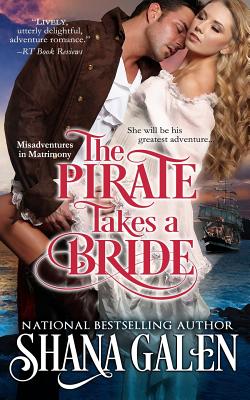 The Pirate Takes A Bride (Misadventures in Matrimony #4)

Ashley Brittany is living a nightmare. She's been mistakenly married to the one man she despises. Months ago, Lord Nicholas took her virtue then scorned her. Now, Ashley will do anything to have her revenge...anything but expose her ugly secret.Nick Martingale has a secret, too: he's Captain Robin Hood, a pirate with a fearsome reputation. But when Nick learns his archenemy, the Barbary pirate Yussef, attacked innocents Nick has sworn to protect, he can think of nothing but vengeance.Only one person stands in his way.His wife.

Shana Galen is the bestselling author of fast-paced adventurous Regency historicals, including the RT Reviewers' Choice The Making of a Gentleman. Booklist says, "Galen expertly entwines espionage-flavored intrigue with sizzling passion," and RT Bookreviews calls her "a grand mistress of the action/adventure subgenre." She taught English at the middle and high school level off and on for eleven years. Most of those years were spent working in Houston's inner city. Now she writes full time. She's happily married and has a daughter who is most definitely a romance heroine in the making. Shana loves to hear from readers, so send her an email or see what she's up to daily on Facebook and Twitter.
Loading...
or support indie stores by buying on