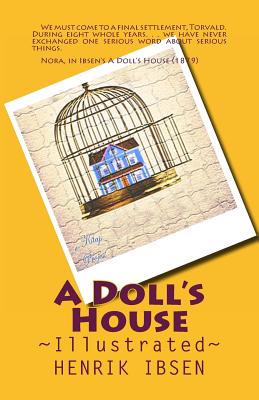 A Doll's House is a three-act play in prose by Henrik Ibsen. It premiered at the Royal Theatre in Copenhagen, Denmark, on 21 December 1879, having been published earlier that month.List of characters of the Book: -Nora Helmer - wife of Torvald, mother of three, living out the ideal of the 19th century wife, but leaves her family at the end of the play.-Torvald Helmer - Nora's husband, a newly promoted bank manager, suffocates but professes to be enamoured of his wife.-Dr. Rank - Rich family friend, who is secretly in love with Nora. He is terminally ill, and it is implied that his "tuberculosis of the spine" originates from a venereal disease contracted by his father.-Kristine Linde - Nora's old school friend, widowed, seeking employment (named Kristine in the original Norwegian text).-Nils Krogstad - Employee at Torvald's bank, single father, pushed to desperation. A supposed scoundrel, he is revealed to be a long-lost lover of Kristine.-The Children - Ivar, Bobby and Emmy-Anne Marie - Nora's former nanny, now cares for the children.-Helene - The Helmers' maid-The Porter - Delivers a Christmas Tree to the Helmer household at the beginning of the play.We must come to a final settlement, Torvald. During eight whole years. . . we have never exchanged one serious word about serious things.Nora, in Ibsen's A Doll's House (1879)