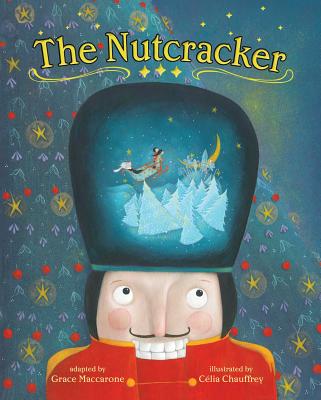 An adaptation of the classic Christmas tale for young children, complete with beautiful illustrations!

On Christmas Eve, Clara and Fritz are waiting patiently for the party to start and for their godfather, Drosselmeyer, to bring them presents. When he finally arrives, he brings many wonderful toys, but Clara is taken by a rather simple nutcracker. Her brother promptly steals and breaks it, but Drosselmeyer repairs it for her. After everyone else goes to sleep, she goes to say goodnight to the Christmas tree and nutcracker, when something strange happens. The tree and the entire room seem to grow around her, and huge, squeaking mice invade the room. . . . But her nutcracker springs to life to defend her! Clara and the nutcracker defeat the Mouse King, and the nutcracker turns into a human. They meet the Sugarplum Fairy and are entertained by dancers from all around the world before Clara wakes up. Was it all a dream?

This beautifully adapted classic tale with striking illustrations is the perfect Christmas book to share with kids!

Waiting behind closed doors was difficult for Clara and Fritz. But it was especially difficult on Christmas Eve!
The children struggled to avoid wrinkling and spotting their new clothes. Clara was able to meet the challenge, but Fritz found it unbearable.
Clara and her brother tried to busy themselves with their favorite books, but the activity behind the doors drew all their attention. Neither Robin Hood’s nor Alice’s adventures could pull them away.
Only the loudest sounds came through the solidly built walls and door. “I bet that’s one of your presents,” said the mischief-making Fritz at the sound of a sudden crash. “It’s probably broken.”
Seven-year-old Clara, though, was used to her brother’s taunts and was not concerned. Especially since she was absorbed by imaginings of her own. Behind the doors, she envisioned a tree with toys and edible treats, and beneath the tree, a large box containing a new doll, curly-haired, in a dress with a big sash and pantaloons with many layers. Oh, how lovely she would be! They’d go on excursions and be constant companions—the very best of friends.

E.T.A. Hoffmann (1776-1822) was a German author, composer, and caricaturist best known for writing The Nutcracker and the Mouse King, which inspired many other book, movie, and ballet adaptations.

Célia Chauffrey is a children’s book illustrator who was born and raised in a suburb of Paris. After studying literature, she trained to become a graphic designer at Émile Cohl art school in Lyon, France. Célia has illustrated several books that have been published in Europe.
Loading...
or support indie stores by buying on
(This book is on backorder)