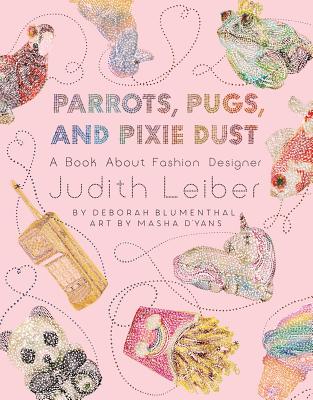 This is a moving and impassioned picture book about iconic handbag designer Judith Leiber that will embolden young readers to use their imaginations and inspire the world with their own creativity!

At night, she took comfort

with any scraps she could find.

Every purse she made

made her dreams come alive.

Growing up in Budapest, Hungary, Judith Leiber drew inspiration from her father, who always brought back special handbags for her mother from wherever he traveled. After getting a job at a handbag house, she dreamt up designs that took her mind off her difficult life. World War II had broken out, and Judith and her family were Hungarian Jews facing persecution. At night, she would make handbags with any scraps she could find.

She found her passion for fashion, and after the war ended, Judith immigrated to America. Here, she found her vision for her designs from preening peacocks, fanciful frogs donning gilded crowns, burgers and fries, and layer cake. She turned the ordinary into extraordinary handbags, designing creations unlike anything that had been seen before.

This is an inspiring picture book about finding your passion and being creative from the same team behind Polka Dot Parade: The Story of Bill Cunningham!

With imagination, skill and perseverance, a young Jewish woman wins her place in the fashion world after surviving the horror of World War II in this nonfiction picture book.
— Melinda Greenblatt

Deborah Blumenthal is an award-winning journalist and nutritionist who now divides her time between writing children's books and adult novels. She has been a regular contributor to the New York Times (including four years as the Sunday New York Times magazine beauty columnist), and a home design columnist for Long Island Newsday. Her feature stories have appeared in many other newspapers and national magazines, including New York's Daily News, the Washington Post, the Los Angeles Times, Harper's Bazaar, Cosmopolitan, Woman's Day, Family Circle, Self, and Vogue. She is the author of Fancy Party Gowns: The Story of Fashion Designer Ann Cole Lowe and Polka Dot Parade: The Story of Bill Cunningham. Blumenthal lives in New York City. You can visit her online at deborahblumenthal.com.

Masha D'yans is an award-winning artist, author, and illustrator who wears many hats, mostly of her own design. She has a line of watercolor greeting cards inspired by the marvels of nature, fairy tales, anything that blows her socks off, and her refusal to grow up. Bursting with colorful washes and delicate details, Masha's distinctive work rapidly gained a following, leading to debuts in Barneys New York, Louis Boston, and Neiman Marcus.
Today, her cards can be found in shops the world over. She also styles and designs clothing, as well as a range of products, including MoMA's renowned pop-up cards and calendars for Rizzoli. Her work has been featured in numerous movies and TV shows, such as Funny People and The Kids Are Alright. Masha's literary portfolio includes book covers like All We Have Left by Wendy Mills, picture books such as Polka Dot Parade: The Story of Bill Cunningham, A Poem as Big as New York City, and Razzle-Dazzle Ruby (which she illustrated, wrote, and paper-engineered), and the coloring book Color Me Enchanted. Originally from Europe, she holds a BFA from Cooper Union. Masha now lives in Los Angeles, California. You can visit her online at masha.com.
Loading...
or
Not Currently Available for Direct Purchase