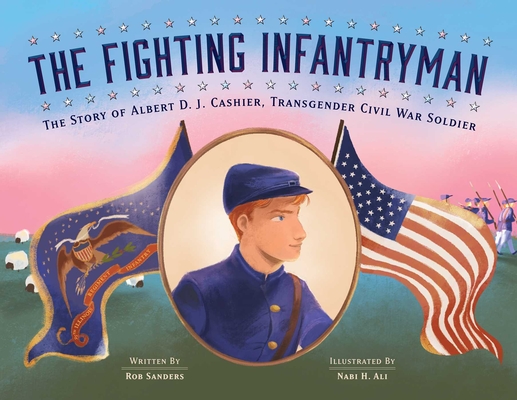 This beautifully written and timely story shows a transgender soldier's personal bravery as he faced daring challenges on the battlefield and privately battled the restrictions and confines of gender.

By the time she arrived in Belvidere, Illinois, and started working as a farmhand, Jennie had a new name and a new identity . . .

In 1861, the winds of war blew through the United States. Jennie Hodgers, a young immigrant from Ireland, moved west to Illinois and soon had a new name and a new identity--Albert D. J. Cashier. Like many other young men, Albert joined the Union Army. Though the smallest soldier in his company, Albert served for nearly three years and fought in forty battles and skirmishes. When the war ended, Albert continued to live his life as a man. His identity fit him as snug as his suspenders.

Decades later, a reporter caught wind of the news that an old man in the Soldiers' and Sailors' Home was actually a woman. The news swept through the country. What would happen to Albert and his military pension? Would he be allowed to continue to live as he wished? How would his friends, fellow soldiers, and others in the community react?

This book is published in partnership with GLAAD to accelerate LGBTQ inclusivity and acceptance.

[Albert D.J. Cashier's] story is well served by Sanders' telling of it, written primarily in short, declarative, well-crafted sentences. Ali's soft-colored illustrations--in both full-page and vignette pictures--capture the spirit and tone of what is a remarkable story.
— Booklist

Rob Sanders is a picture book author, a writing teacher, a sometimes blogger, and a dog lover. He worked for fifteen years in religious educational publishing as a writer, editor, editorial manager, and product designer. These days, he teaches elementary school kids about books and words and reading and writing, and writes books for those same kids.

Rob is the author of the nonfiction picture books Pride: The Story of Harvey Milk and the Rainbow Flag, Peaceful Fights for Equal Rights, and Stonewall: A Building. An Uprising. A Revolution. But he'll always write fiction too, including Rodzilla, Outer Space Bedtime Race, and Ball & Balloon.
robsanderswrites.com

Nabi H. Ali is a Tamil-American illustrator who enjoys creating diverse works that showcase an array of cultures and peoples. His interest in illustrative works started when he realized he could help create representation in the arts and in media for minorities, and he is very passionate about working with characters that he would have liked to have seen in books when he was a kid. His hobbies include drawing (of course), doll collecting, reading, learning about South Asian mythology and folklore, and researching history.
Loading...
or support indie stores by buying on
(This book is on backorder)