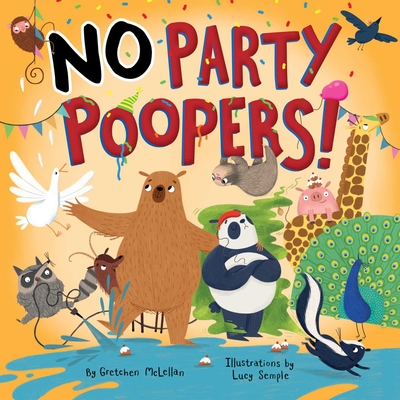 You're invited to the bears' party! But be warned, there are absolutely, PAWSitively no party poopers allowed!

Two bears decide to throw a big party in their neighborhood, but they're having trouble making the guest list. One bear wants to invite all the neighbors, but his friend thinks it's a bad idea. He's worried that they'll ruin the party--the rhinos will pop the balloons, the goats will chew up the party hats, the crows will hoard all the shiny prizes--in other words, they'll be party poopers! Can his friend convince him to change his mind in time for the party?

Gretchen McLellan is a former teacher who delighted in welcoming children into the magical world of reading in her classroom. Now an author, she's excited about sharing her books, such as Mrs. McBee Leaves Room 3, I'm Done!, Button and Bundle, and When Your Daddy's a Soldier, with kids everywhere. Gretchen lives in Washington State with her husband, cat, and dog, and celebrates when her three children are home.
gretchenmclellan.com

Lucy Semple is an illustrator based in Nottinghamshire, United Kingdom. She always dreamed of working in a creative career. As a child, she would either be using the family video camera to direct a rendition of a Roald Dahl poem or have her head firmly buried in a book. She now enjoys channeling that creative energy into drawing bright, bold, and often furry characters. When she isn't bringing her scribbled creations to life, Lucy enjoys drinking considerable amounts of tea, baking, and cuddling up to watch a film with her partner, daughter, and their grumpy tomcat, Nim.
lucysemple.co.uk
Loading...
or
Not Currently Available for Direct Purchase