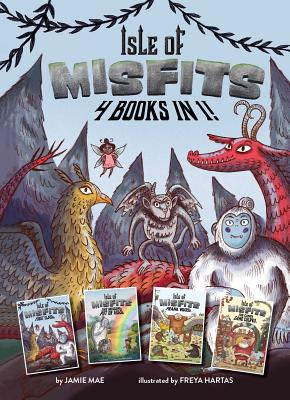 Gibbon is a gargoyle who doesn't like to sit still. But a chance meeting brings him to an island filled with other mythical creatures and a special school for misfits like him! Gibbon and his new friends get all the excitement they can handle in this magical series!

Gibbon is a gargoyle who has been unable to sit still for hundreds of years. One day, he leaves his post from the castle and meets three other gargoyles. They bring him to an island filled with other mythical creatures and a special academy that will train him to go on missions to protect all sorts of mythical creatures who are in trouble. Join Gibbon as he makes friends with a hilarious cast of characters such as a clumsy dragon, an ill-tempered fairy, a griffin with poor flying skills, and a yeti with a man bun in this four-book, creature-filled collection!

Jamie Mae is a children's book author living in Brooklyn with her fluffy dog, Boo. Before calling New York home, she lived in Quebec, Australia, and France. She loves learning about monsters, mysteries, and mythologies from all around the globe.

Freya Hartas is a UK-based illustrator specializing in children's books. She lives in the vibrant city of Bristol and works from her cozy, cluttered desk. Freya loves to conjure up humorous characters, animals, and monsters and to create fantastical worlds and places for them to inhabit and get lost in.
Loading...
or support indie stores by buying on