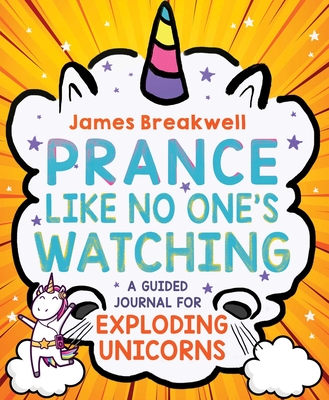 A Guided Journal for Exploding Unicorns

The hilarious social media star James Breakwell shares how to develop your unique sense of humor through this 96-page guided workbook.

Social media star James Breakwell takes a break from giving parents hilarious advice and turns to their children instead. This 96-page guided journal is for kids to explore their developing sense of humor and to mine the comedy out of everyday triumphs and tragedies. Through prompts, quizzes, and other guided activities, Breakwell encourages readers to prance like unicorns and find their own unique, hilarious, and creative voices.

Activities include:
-- Your acceptance speech into the Clown Hall of Fame
-- List three things that you personally find funny
-- How to turn a weird situation into a humorous one
-- Draw a comic using the supplied dialogue
-- Who would win in a fight between a gorilla and a robot?

James Breakwell is a professional comedy writer and amateur father of four girls, ages eight and under. He is best known for his family humor Twitter account @XplodingUnicorn, which boasts more than a million followers. The account went viral In April 2016 and transformed James from a niche comedy writer into one of the most popular dad on social media.

Since becoming internet famous, James has been profiled by USA Today, US Weekly, The Daily Mail, Metro, The Telegraph, Cosmopolitan, Better Homes and Gardens, Buzzfeed, Huffington Post, Upworthy, The Chive, Bored Panda, 9gag, College Humor, various ABC and Fox TV news affiliates, and countless other TV, radio, and internet outlets. Pictures of his smiling girls have been displayed in newspapers as far away as India. His articles have appeared in Reader's Digest, The Federalist, and AskMen. He has been a guest multiple times on HLN's The Daily Share.

Closer magazine named James its 2016 Blogger Dad of the Year. In 2017, he was a finalist for a Shorty Award in the parenting category.

James is the author of three parenting books. Only Dead on the Inside: A Parent's Guide to Surviving the Zombie Apocalypse is a guide for raising a happy, healthy child when the undead roam the earth. Bare Minimum Parenting: The Ultimate Guide to Not Quite Ruining Your Child teaches regular moms and dads to best overachieving moms and dads using strategic laziness. And How to Survive Ostrich Attacks, Accidental Time Travel, and Anything Else that Might Happen on an Average Tuesday walks parents through how to survive the typical hazards of suburban life.
Loading...
or
Not Currently Available for Direct Purchase