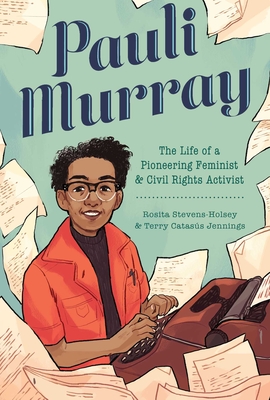 The Life of a Pioneering Feminist and Civil Rights Activist

Pauli Murray was a trailblazer who spent her life fighting for civil rights and women's rights. Writer, lawyer, activist, priest, Pauli was a champion for justice. Her extraordinary life is immortalized in this riveting biography told in verse.

"Pauli Murray was brilliant, outspoken, and committed to achieving dignity and equality for all under the law. Rising from poverty, Murray challenged pervasive race and sex discrimination and helped launch the two most important movements of the Twentieth Century: civil rights and women's rights. This new biography capsulizes important events and accomplishments of an iconoclast who would not take 'No' for an answer. Young readers will be drawn to the story of Pauli's bravery and pivotal role in history." -- Christian F. Nunes, President, National Organization for Women

"This is a compelling biography of an 'unsung force'-an inspiring and transformative figure who broke barriers pivotal to both the civil rights and women's movements."--Horn Book Magazine

"This inspiring biography in verse aims to promote the life and work of the lesser-known yet influential Black civil rights activist and feminist."--Booklist Reviews

Pauli Murray was a thorn in the side of white America demanding justice and equal treatment for all. She was a queer civil rights and women's rights activist before any movement advocated for either--the brilliant mind that, in 1944, conceptualized the arguments that would win Brown v. Board of Education of Topeka; and in 1964, the arguments that won women equality in the workplace.

Throughout her life, she fought for the oppressed, not only through changing laws, but by using her powerful prose to influence those who could affect change. She lived by her convictions and challenged authority to demand fairness and justice regardless of the personal consequences. Without seeking acknowledgment, glory, or financial gain for what she did, Pauli Murray fought in the trenches for many of the rights we take for granted. Her goal was human rights and the dignity of life for all.

Praise For Pauli Murray: The Life of a Pioneering Feminist and Civil Rights Activist…

"This inspiring biography in verse aims to promote the life and work of the lesser-known yet influential Black civil rights activist and feminist."
— Booklist

The remarkable life of Black activist, attorney, and Episcopal priest Pauli Murray (1910-1985) is presented in an engaging, extensively documented nonfiction account in verse. Drawing heavily on Murray's autobiography, poems, and other writings, the book spans her entire life and identifies her influences as she became determined, from a young age in Jim Crow North Carolina, to learn and help others appreciate the true history of her people. After enduring great hardship in order to graduate from Hunter College, her efforts to get ahead were thwarted by the Great Depression. She began a lifelong passion for writing to newspapers and public figures about social issues, which she called "confrontation by typewriter," and was very successful at making those messages heard by people in power, including President Roosevelt. Later, at Howard University Law School, Murray was a strong proponent of overturning Plessy v. Ferguson because "separate could never be equal." In the later chapters, the authors acknowledge the limitations of language employed at the time, speculating that today "transgender / is possibly / what Pauli would call herself...Pauli's pronouns may have been / they/them/their." This is a compelling biography of an "unsung force"-an inspiring and transformative figure who broke barriers pivotal to both the civil rights and women's movements. Appended with photographs, authors' notes, a timeline, source notes, and a bibliography.
— Horn Book Magazine

Rosita Stevens-Holsey is one of Pauli Murray's nieces, and an ambassador for the Pauli Murray family. She feels it is an honor to be part of enhancing and promoting her aunt's legacy, and her responsibility as a family member to do so. Rosita lives outside of Washington, D.C.

Terry Catasús Jennings came to the United States with her family after fleeing Cuba after the Bay of Pigs invasion. Today, Terry resides in Reston, Virginia with her family. She is the author of the upcoming picture book La Casita de Esperanza/The Little House of Hope and the Definitely Dominguita chapter book series.
Loading...
or support indie stores by buying on