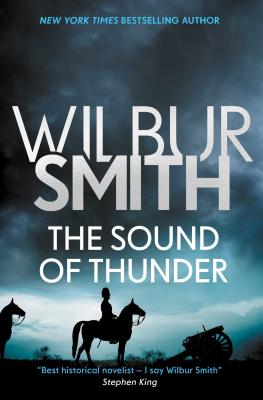 Sound of Thunder (The Courtney Series

The When The Lion Feeds Trilogy #2)

SOME WILL WIN. SOME WILL LOSE.

As war is declared between the British Empire and the Transvaal Republic, a battle-hardened and newly wealthy Sean Courtney realizes that it is not only on the front lines where enemies are made. While Sean’s own brother, Garrick, is bitter and vengeful—determined to destroy Sean and the empire he has built—his sons are repeating the sins of their father, locked in a violent and seemingly never-ending struggle.

On the brink of losing everything in the ongoing war, Sean discovers there is something he can’t buy—true love—in the strong-willed, self-assured and beautiful Ruth Friedman. But this love forms a weakness in him, a weakness Garrick is determined to manipulate to deliver the revenge he so desperately seeks.

As Sean fights to save himself, his family, and his fortune, The Sound of Thunder becomes a vibrant tale of love and hatred in many forms: between brothers, between friends, between father and son, and between man and woman.

The Sound of Thunder is the thrilling second novel from Wilbur Smith, one of the bestselling and most beloved authors of the 20th century.