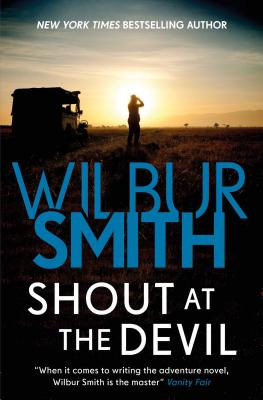 Shout at the Devil

“For the first time they confronted each other. These two who had played murderous hide-and-seek for three long years across ten thousand square miles of bush. ‘Ja!’Fleischer’s jubilant bellow as he swung and sighted the pistol at the man in the water below him. ‘This time!’aiming carefully, steadying the Luger with both hands.” The hunt is on… for revenge. Flynn Patrick O’Flynn is an Irish-American poacher and conman who has spent the last few years taunting the military commander Herman Fleischer in the jungles of German East Africa. When young Sebastian Oldsmith joins O’Flynn as aide and apprentice, he’s eager to follow in his footsteps. But as the world changes in the shadow of the Great War, Fleischer takes terrible action against the two men. Driven by revenge and fury, Oldsmith and O’Flynn join the British naval forces in order to destroy the Germans, and a shocking plan is formed. Can two of Africa’s greatest hunters bring down one of the greatest battleships in the world?