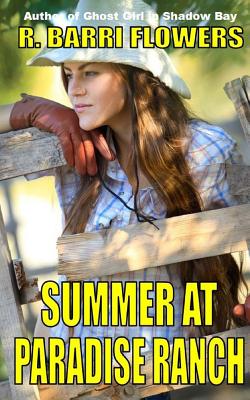 From R. Barri Flowers, the bestselling author of teen novels Count Dracula's Teenage Daughter, Teen Ghost at Dead Lake, and Danger in Time, comes the new YA adventure series, Summer at Paradise Ranch. Four months shy of turning sixteen, Lexi Montoya was still trying to come to terms with her parents' divorce and her mom's marriage to a man she met online, relocating to Maui, Hawaii. Choosing to remain with her dad in Seattle, Lexi had planned to spend her first summer since the divorce hanging out with her boyfriend, Matt, and her best friend, Robin. But her dad had other plans, insisting she spend the summer visiting her mom and stepdad at his ranch called Paradise Ranch in Wailuku, in west Maui. Lexi went there with an attitude. Then she meets a cute Hawaiian guy named Mitsuo, is thrown into a love triangle, becomes friends with a teen girl named April who lives on a ranch next door; rides her first horse--an Arabian mare named Poppy--learns to hula dance and surf, and finds herself embroiled in a dangerous rescue mission when Poppy and another horse named Casper are stolen from her stepfather's ranch. By the time her tropical summer adventure comes to an end, Lexi hates to leave Maui and say goodbye to Mitsuo. But can she stay when Matt is waiting for her back at home to pick up where they left off? Or will he lose her to a summer romance? Summer at Paradise Ranch is a great coming of age adventure with young romance and mystery in paradise. Now available in eBook, print, and audio.

R. Barri Flowers is the bestselling author of young adult novels, including Out for Blood, Count Dracula's Teenage Daughter, Teen Ghost at Dead Lake, Ghost Girl in Shadow Bay, Danger in Time, And Christmas Wishes: Laura's Story. His novels can be found in print, eBook, and audio. The author has also written a number of bestselling teen and young adult related nonfiction books as well, including Runaway Kids and Teenage Prostitution, Kids Who Commit Adult Crimes, and Children and Criminality. Follow R. Barri Flowers on Twitter, Facebook, Pinterest Goodreads, Google+, LinkedIn, YouTube, LibraryThing, and www.rbarriflowers.net. And learn more about the author in Wikipedia.
or
Buy Here
Copyright © 2020 American Booksellers Association