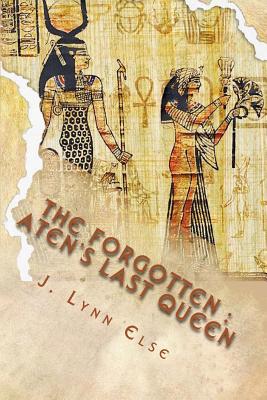 "I am King Tut's wife, but my name is barely a whisper in history's memory. I was the last of my family to survive the Aten revolution. I had a child at age 12 and was forced to marry three times. But that didn't mean my story ended badly. My name is Ankhesenamun, my loved ones called me An, and I will stop at nothing to save my family."Despite the vast treasure found in Pharaoh Tutankhamun's tomb, there is little left over regarding his bride. From the turbulence of her father's reign, Akhenaten, who forced monotheism on the country to the mending of these wounds by the now-famous Tutankhamun, her life saw more change than most ancient Egyptians dared even dream about. Evidence left to us about her is this: She was forced to marry her father, her brother, and her grandfather. She gave birth to one healthy baby girl and two stillborn girls. She was widowed at age 12 and 23. She saw four pharaohs crowned within 23 years. After her grandfather took the throne, she disappeared from history. Ankhesenamun grew up a princess and became a queen at age 13. Her husband, Tutankhamun, was 9. With outside forces try to influence every choice they make, Ankhesenamun finds herself torn between her heart and her duty.With a twist of biblical history interlaced, Ankhesenamun's voice has a new song to sing which has otherwise been forgotten. Her story weaves through the sands of time as in each chapter, she narrates her past and the path her life has been directed to take. Between chapters, Ankhesenamun is dealing with the repercussions of her husband's death as power-hungry men are grappling for pharaoh's crown. Can a lone woman stand against the tides of time which have already consumed her parents, her sisters, and her husband? Will she find a way to overcome the most terrible of all fates -- having her name erased from the walls of history? May the gods have mercy that she does not become one of the forgotten...

J. LYNN ELSE loves reading and writing about awesome women from antiquity. Besides history, she also gets nerdy with Star Wars, Star Trek, and MST3K. She's self-published two historical fiction novels set in ancient Egypt, "The Forgotten: Aten's Last Queen" and "The Forgotten: Heir of the Heretic." "Descendants of Avalon, Awakenings book 1," a YA Fantasy with interwoven elements of the legends and people of King Arthur's time, was released through Inklings Publishing in May 2018. Additionally, in July 2018, she self-published a sci fi novella, "Strangely Constructed Souls," which asks 'what the price of revenge and how far would you go to right a wrong?' J. Lynn's always had a flare for the dramatic, graduating college with a theater major and a dance minor. She lives in Minnesota with her husband and two kids where her shelves are overrun with books, her kitchen is overrun with loose-leaf tea, and her workroom is overrun with Funko Pop figures. She enjoys sketching, reliving her 1990s by watching the latest X-Files episodes, honing her Fruit Ninja skills, and randomly busting out into song and dance. She believes in unicorns and practicing random acts of awesome.
Loading...
or support indie stores by buying on