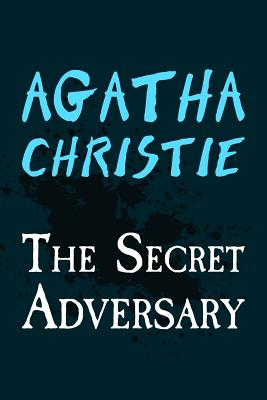 The Secret Adversary, a detective novel by Agatha Christie, is her second published novel. The book introduces the characters of Tommy and Tuppence who feature in three other Christie novels.

A man aboard the sinking RMS Lusitania on 7 May 1915 quietly gives important papers to a young American woman, as she is more likely to survive.

In 1919 London, demobilised soldier Tommy Beresford meets war volunteer Prudence "Tuppence" Cowley, both out of work and money. They form the "The Young Adventurers, Ltd," planning to hire themselves out with " n]o unreasonable offer refused." They are overheard by a Mr Whittington who follows Tuppence to offer her a position. He is shocked when she gives her name as "Jane Finn." Whittington sends her away with some money, then disappears without a trace. They advertise for information regarding Jane Finn.

The advertisement yields two immediate replies. They first meet with Mr Carter, whom Tommy recognises as a leader in British intelligence from his war service. Mr Carter tells the story of Jane Finn, an American heading for Paris on the RMS Lusitania when it sank in 1915. She received a secret treaty to deliver to the American embassy in London. She survived, but the government has found neither Jane Finn nor the draft treaty since. Publication of the treaty now would compromise the British government. Tommy and Tuppence agree to work for Carter. He warns them this is a dangerous mission, because of the elusive and merciless figure known as Mr Brown. Next they meet with Julius Hersheimmer, an American man who is the first cousin of Jane Finn and a multimillionaire, staying at the Ritz Hotel. He is intent on finding her. He has already contacted Scotland Yard; an Inspector named Brown took his only photo of Jane, before a real inspector contacted him. Tommy and Tuppence join forces with Julius.

Upon publication of the first book edition it was reviewed by The Times Literary Supplement, which described it as "a whirl of thrilling adventures." It stated that the characters of Tommy and Tuppence were "refreshingly original" and praised the fact that the "identity of the arch-criminal, the elusive "Mr Brown," is cleverly concealed to the very end."

The critic for The New York Times Book Review was also impressed: "It is safe to assert that unless the reader peers into the last chapter or so of the tale, he will not know who this secret adversary is until the author chooses to reveal him."