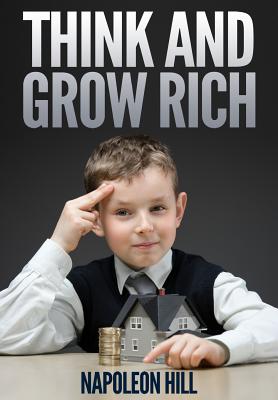 "The starting point of all achievement is DESIRE. Keep this constantly in mind. Weak desire brings weak results, just as a small fire makes a small amount of heat."
--- Napoleon Hill, Think and Grow Rich Think and Grow Rich is a 1937 motivational personal development and self-help book by Napoleon Hill and inspired by a suggestion from Scottish-American businessman Andrew Carnegie. While the title implies that this book deals with how to get rich, the author explains that the philosophy taught in the book can be used to help people succeed in all lines of work and to do or be almost anything they want. Jim Murray wrote that Think and Grow Rich was credited for Ken Norton's boxing upset of Muhammad Ali in 1973. The Reverend Charles Stanley writes, "I began to apply the principles of (Think and Grow Rich) to my endeavors as a pastor, and I discovered they worked " The book was first published during the Great Depression. At the time of Hill's death in 1970, Think and Grow Rich had sold more than 20 million copies and by 2011 over 70 million copies had been sold worldwide. It remains the biggest seller of Napoleon Hill's books. BusinessWeek Magazine's Best-Seller List ranked it the sixth best-selling paperback business book 70 years after it was published. Think and Grow Rich is listed in John C. Maxwell's A Lifetime "Must Read" Books List.

Napoleon Hill (October 26, 1883 - November 8, 1970) was an American author in the area of the new thought movement who was one of the earliest producers of the modern genre of personal-success literature. He is widely considered to be one of the great writers on success. His most famous work, Think and Grow Rich (1937), is one of the best-selling books of all time (at the time of Hill's death in 1970, Think and Grow Rich had sold 20 million copies). Hill's works examined the power of personal beliefs, and the role they play in personal success. He became an advisor to President Franklin D. Roosevelt from 1933 to 1936. "What the mind of man can conceive and believe, it can achieve" is one of Hill's hallmark expressions. How achievement actually occurs, and a formula for it that puts success in reach of the average person, were the focal points of Hill's books.
or
Buy Here
Copyright © 2020 American Booksellers Association