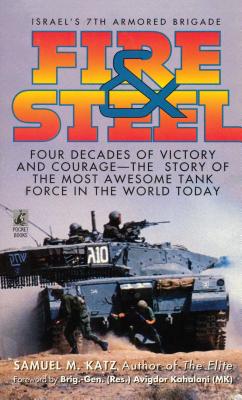 Author of The Elite, Samuel Katz profiles Israel’s 7th Armored Brigade with coverage of the 1967 Six-Day War, the fight for the Valley of Tears in the Golan Heights during the 1973 Yom Kippur War, and the Beirut-Damascus Highway campaign during the 1982 invasion of Lebanon in this action-packed story of four decades of victory and courage from the most awesome tank force in the world.

The force of Israel’s 7th Armored Brigade has rewritten the manuals of armored warfare, surpassed the limits of courage under fire, and impressed military experts everywhere as the finest tank unit in the world.

Composed of men marked by gun grease, suffused with the stench of cordite, and devoted to guarding some of modern history’s hardest-won ground, these fighters are the elite of a nation’s youth.

Starting with an armor of bought and stolen World War II surplus tanks, the brigade upgraded to the Merkava—otherwise known as the nation’s deadliest tank.

Fire & Steel is the story of a breathtaking 72 hours during the 1967 Six-Day War, the bitterly won fight for the Valley of Tears during the 1972 Yom Kippur War, and the bloody campaign for the Beirut-Damascus Highway during the 1982 invasion of Lebanon, which resulted in the obliteration of dozens of Syrian tanks.

This history-packed page-turner looks at Israel’s 7th Armored Brigade and relives the electrifying annals of the fighters known as the “Brigade of Heroes.”