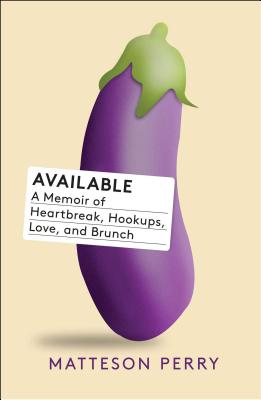 A Memoir of Heartbreak, Hookups, Love and Brunch

From a breakout storytelling star at The Moth, a real-life romantic comedy about a guy and a girl—and twenty-nine other girls: a memoir about an unexpected break-up, one self-imposed year of being single, and how a “nice guy” survived dating in the twenty-first century.

Matteson Perry is a Nice Guy. He remembers birthdays, politely averts his eyes on the subway, and enjoys backgammon. A serial monogamist, he’s never asked a stranger out. But when the girl he thought might be The One dumps him, he decides to turn his life around. He comes up with The Plan: 1. Be single for a year. 2. Date a lot of women. 3. Hurt no one’s feelings. He’s not out to get revenge, or to become a pickup artist; he just wants to disrupt his pattern, have some fun, and discover who he is. A quick-witted Everyman, Perry throws himself into the modern world of courtship and digital dating, only to discover that even the best-laid plans won’t necessarily get you laid. Over the course of a year he dated almost thirty different women, including a Swedish tourist, a former high school crush, a born-again virgin, a groupie, an actress, a lesbian, and a biter.

In Available, award-winning storyteller Matteson Perry brings us into the inner sanctum of failed pick-up lines, uncomfortable courtships, awkward texts, and self-discovery, charting the highs and lows of single life and the lessons he learned along the way. Candid, empathetic, and devastatingly funny, Available is the ultimate real-life rom-com about learning to date, finding love, and becoming better at life.

Matteson Perry is a screenwriter, performer, two-time winner of the Moth GrandSlam storytelling championship, and the host of the monthly Moth StorySlam in Los Angeles. His writing has appeared in The New York Times, McSweeney’s, College Humor, and other publications. His work has been featured on NPR and Funny or Die. A Colorado native, Matteson lives in Los Angeles with his wife.

Praise For Available: A Memoir of Heartbreak, Hookups, Love and Brunch…

“Matteson Perry is what you’d get if Bill Bryson were writing about 21st century dating. His book is funny, touching and highly educational for old people like me who got married before the age of swiping-right and molly (and by educational, I mean awesomely voyeuristic). He’s the most entertaining chronicler of nice guy romance since Nick Hornby.”—A.J. Jacobs

"Matteson Perry has written the antidote to the bro-hook up book. Available is a thoughtful, interesting, and most of all, funny memoir about relationships, filled with universal feelings but unique stories.”—Justin Halpern, #1 New York Times bestselling author of Sh*t My Day Says and I Suck at Girls

"This book makes dating and having sex sound so real and emotional and fun and funny. It's making me think I should maybe lose my virginity someday!"-Megan Amram, author of Science...for Her!

“Matteson Perry has written the perfect book for people who like stories about sex and love that are also funny. So, unless you are a priest, a nun, or Newt Gingrich, you will love reading Available.”—Paul Shirley, author of Can I Keep My Jersey?

"Matteson Perry has crafted a chronicle of dating that does what the best ones do: remind you how humbling and humiliating the whole process is, while simultaneously reminding you that there is a way out that isn’t death. Breezy, exceptionally entertaining, and cringe-y in all the best ways, AVAILABLE makes me personally happy that I am not."--Stephen Falk, creator of You're the Worst and television writer for Weeds and Orange is the New Black

"Available at times reads like your own memories in someone else's brain, and Perry's journey from smooth-skinned lady-fearer to married man is funny, honest, brisk, and heartfelt."--Joe Randazzo, author of Funny on Purpose and head writer for @Midnight

"Matteson Perry illuminates dating...it’s interesting to see what he learns about love and life."--Bustle, Best Non-Fiction for Warmer Days Ahead

“Matteson Perry's deft comic memoir … is leavened by an evolving self-awareness and a genuine comic gift...  Successfully straddling the line between satire and seriousness, Perry offers a few more narrative twists on the way to a well-earned happy ending.”--The Chicago Tribune

"Just when you think there's nothing new to say about dating, along comes this Perry dude and his hilarious, touching post-breakup year of hound-dogging...He gets better, bolder--and finally learns that Nice (and Funny) does get the girl."--People

"An insightful perspective into one man's quest to not find love. The reader is granted a peek into the brain of a dating male who's profoundly honest and completely willing to share what he thinks and feels. Perry started the journey with the hope that he could learn to be better with women. In the end, he learned to be better at life.” –-Associated Press

"In his hilarious memoir, award-winning screenwriter Matteson Perry brings us into the inner sanctum of failed pick-up lines, uncomfortable courtships, awkward texts, and self-discovery, charting the highs and lows of single life and the lessons he learned along the way."--ABC News, Must-Read Book for Summer 2016

“Though Perry’s maturation and insight into the male mind made the reading compelling, most of all I recommend this book because it was really funny. The quick read had me laughing out loud all the way through. Combine that with a happy ending and you’ve got just what you want for a summer read.”--The Huffington Post

"Reads like a male version of Sex and the City...very funny."--Manhattan Book Review
or
Not Currently Available for Direct Purchase
Copyright © 2020 American Booksellers Association