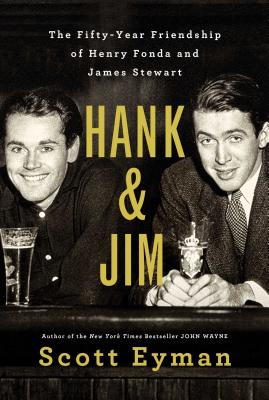 The Fifty-Year Friendship of Henry Fonda and James Stewart

New York Times bestselling author Scott Eyman tells the story of the remarkable friendship of two Hollywood legends who, though different in many ways, maintained a close friendship that endured all of life’s twists and turns.

Henry Fonda and James Stewart were two of the biggest stars in Hollywood for forty years. They became friends and then roommates as stage actors in New York, and when they began making films in Hollywood, they roomed together again. Between them they made such memorable films as The Grapes of Wrath, Mister Roberts, Twelve Angry Men, and On Golden Pond; and Mr. Smith Goes to Washington, Destry Rides Again, The Philadelphia Story, It’s a Wonderful Life, Vertigo, and Rear Window.

They got along famously, with a shared interest in elaborate practical jokes and model airplanes, among other things. Fonda was a liberal Democrat, Stewart a conservative Republican, but after one memorable blow-up over politics, they agreed never to discuss that subject again. Fonda was a ladies’ man who was married five times; Stewart remained married to the same woman for forty-five years. Both men volunteered during World War II and were decorated for their service. When Stewart returned home, still unmarried, he once again moved in with Fonda, his wife, and his two children, Jane and Peter, who knew him as Uncle Jimmy.

For Hank and Jim, biographer and film historian Scott Eyman spoke with Fonda’s widow and children as well as three of Stewart’s children, plus actors and directors who had worked with the men—in addition to doing extensive archival research to get the full details of their time together. This is not another Hollywood story, but a fascinating portrait of an extraordinary friendship that lasted through war, marriages, children, careers, and everything else.

Praise For Hank and Jim: The Fifty-Year Friendship of Henry Fonda and James Stewart…

"An absorbing dual portrait of two riveting, contrasting performers who were best friends for more than 50 years."
— The Wall Street Journal

“We love Hank Fonda and Jimmy Stewart already. They were beloved actors in a beloved age. So putting them either side of an ampersand seems natural. But what Scott Eyman does is to say, well, pay attention – these were two difficult, lonely, inarticulate guys who could seem alarming and chilly. But they were friends and Eyman has told their story like a movie, with humor, pathos and enchantment. This is not two biopics hitched together. It’s a love story for guys who never mentioned or even noticed love.”
— David Thomson, author of The Biographical Dictionary of Film and Warner Bros: The Story of an American Movie Studio

"Chronicles the friendship between Fonda and Stewart in a charming, folksy style."
— Gary M. Kramer

"Henry Fonda and Jimmy Stewart were two of the most brilliant stars of Hollywood’s golden age. They were also the best of friends, despite marked differences in their approach to life, love, family and politics. Scott Eyman, one of our finest film historians, presents an intimate, powerful and bittersweet account of these gifted, complex and troubled men and the world they knew and dominated."
— Glenn Frankel, Pulitzer Prize-winning journalist and author of High Noon: The Hollywood Blacklist and the Making of an American Classic

“Scott Eyman has a gift for exploring subjects we think we know, then deepening and enriching that knowledge through diligent research and his gift of observation. This book is no exception. Henry Fonda and James Stewart have never been captured so well, nor has their extraordinary fifty-year friendship.”
— Leonard Maltin

“In his engrossing new book, biographer and film historian Eyman vividly portrays the lives and work of two Hollywood legends. . . . While their long-standing friendship is notable, in tracing their personal lives and accomplishments, Eyman's narrative is even more compelling. He provides a fascinating overview of the industry and the ebbs and flows of his subjects' careers in film, on stage, and eventually TV . . . . An entertaining, richly documented biography that will be appreciated by film and theater scholars as well as fans of these memorable actors.”
— Kirkus Reviews (starred review)

"With the same grace, intimacy, nuance, and thoughtfulness with which he brought John Wayne alive on the page, Scott Eyman conjures the greatness and humanity of two Hollywood giants and the magic spell of their friendship."
— Patrick McGilligan, author of Young Orson: The Years of Luck and Genius on the Path to Citizen Kane

"I had no idea Fonda and Stewart even knew each other, and now I learn two of America's greatest actors were also the greatest of friends. It's gratifying when a gifted writer finds a worthy subject, and Scott Eyman has with Hank and Jim. You have to think both men would have loved the book—although Fonda probably wouldn't have admitted it."
— Daniel de Visé, author of Andy & Don: The Making of a Friendship and a Classic American TV Show

"If you've ever wondered how the Greatest Generation got so great, it was due in part to the respect political opposites like Stewart and Fonda had for one another. In fact, you could say it's a love story in the tradition of Howard Hawks, intimate, knowing, and compulsively readable."