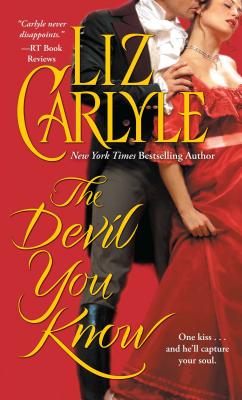 From Rita Award winner and New York Times bestselling author Liz Carlyle comes a spellbinding novel in which the ton’s most charming ne’er-do-well meets his match in a most unexpected fashion and discovers the true meaning of desire...

Frederica d'Avillez is sure she will never marry. She's had a disastrous London season, and now her longtime beau has thrown her over for a more eligible miss. But if Freddie can't have a husband, she's hell-bent on experiencing at least one night of unforgettable passion. Where better than in the arms of the dashing rogue Bentley "Hell-Bent" Rutledge? So what if he's a rake, scoundrel, and all-round devil?

Scandal trails in Bentley's wake and fair maidens usually steer well clear of him—and vice versa. But when the opportunity presents itself, Bentley can't resist Freddie's exotic beauty. When their wild, reckless passion has dire consequences, Bentley is forced to choose between honor and freedom. And Freddie soon realizes that Bentley's devil-may-care façade is just that—for she has unwittingly unleashed his dark secrets...and secret desires.

During her frequent travels through England, Liz Carlyle always packs her pearls, her dancing slippers, and her whalebone corset, confident in the belief that eventually she will receive an invitation to a ball or a rout. Alas, none has been forthcoming. While waiting, however, she has managed to learn where all the damp, dark alleys and low public houses can be found. Liz hopes she has brought just a little of the nineteenth century alive for the reader in her popular novels, which include the trilogy of One Little Sin, Two Little Lies, and Three Little Secrets, as well as The Devil You Know, A Deal With the Devil, and The Devil to Pay. Please visit her at LizCarlyle.com, especially if you're giving a ball.
Loading...
or support indie stores by buying on