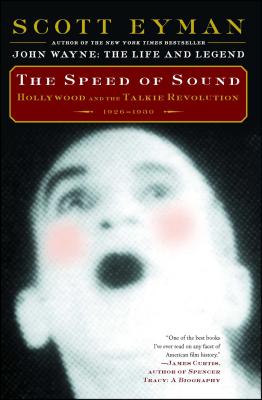 The Speed of Sound (Paperback)

From acclaimed author Scott Eyman comes the fascinating story of how the transition from silent films to ‘talkies’ transformed Hollywood.

It was the end of an era. It was a turbulent, colorful, and altogether remarkable period, four short years in which America’s most popular industry reinvented itself.

Here is the epic story of the transition from silent films to talkies, that moment when movies were totally transformed and the American public cemented its love affair with Hollywood. As Scott Eyman demonstrates in his fascinating account of this exciting era, it was a time when fortunes, careers, and lives were made and lost, when the American film industry came fully into its own.

In this mixture of cultural and social history that is both scholarly and vastly entertaining, Eyman dispels the myths and gives us the missing chapter in the history of Hollywood, the ribbon of dreams by which America conquered the world.

Praise For The Speed of Sound: Hollywood and the Talkie Revolution 1926-1930…

“One of the best books I’ve ever read on any facet of American film history.”
— James Curtis, author of Spencer Tracy: A Biography

“An admirably clear and vivid journey through Hollywood's most turbulent era.”
— Kevin Brownlow, author of The Parade's Gone By...

“The transition from silent film to sound has been covered in many histories of Hollywood but nowhere so thoroughly and delightfully as here.”
— Library Journal