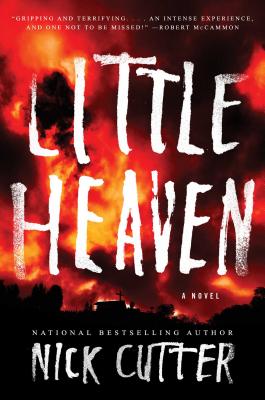 An all-new epic tale of terror and redemption set in the hinterlands of midcentury New Mexico from the acclaimed author of The Troop—which Stephen King raved “scared the hell out of me and I couldn’t put it down...old-school horror at its best.”

From electrifying horror author Nick Cutter comes a haunting new novel, reminiscent of Cormac McCarthy's Blood Meridian and Stephen King’s It, in which a trio of mismatched mercenaries is hired by a young woman for a deceptively simple task: check in on her nephew, who may have been taken against his will to a remote New Mexico backwoods settlement called Little Heaven. Shortly after they arrive, things begin to turn ominous. Stirrings in the woods and over the treetops—the brooding shape of a monolith known as the Black Rock casts its terrible pall. Paranoia and distrust grips the settlement. The escape routes are gradually cut off as events spiral towards madness. Hell—or the closest thing to it—invades Little Heaven. The remaining occupants are forced to take a stand and fight back, but whatever has cast its dark eye on Little Heaven is now marshaling its powers...and it wants them all.

Praise For Little Heaven: A Novel…

“A gripping and terrifying story delivered by a very talented writer. Nick Cutter’s Little Heaven is an intense experience, and one not to be missed!”
— —Robert McCammon, New York Times bestselling author of SWAN SONG

“Terrifying… exceptionally well-written and gripping. Moreover, [the novel] wears its dark heart on its sleeve, illuminating our collective need to unpack the evil of our world—to observe it, challenge it, and ultimately learn to live with it, without going insane. A superbly-crafted epic, Little Heaven proves yet again that [Nick] Cutter is worthy of Stephen King’s praise—King once called Cutter’s writing “old-school horror at its best”—and is a tribute to the genre as a whole. Deeply, deeply unsettling, as it’s meant to be.”

"Little Heaven is the first major horror novel of 2017, and it’s going to take a monumental deluge of quality horror to keep it off of those end-of-year best-of lists that will start popping up 11 months from now….[Cutter’s] developed a clear, strong voice through his body of work. His characters are complex and relatable…they live and breathe within the context of the novel; many of them walking that shaky tightrope between good and bad, sympathetic and irredeemable….Little Heaven is another excellent addition to Nick Cutter’s growing body of work, a grotesque masterpiece that sets the bar high for horror fiction in 2017."

“Cutter proves yet again that he is a master of thoughtful pulp horror….drips with dread from the very first lines. With its claustrophobic, isolated setting, gory details, and strong action sequences, this book is sure to win over horror fans, but there is also a powerful underlying philosophical aspect here, which ponders the meaning of family, love, and community….Imagine that Bentley Little or the late Richard Laymon tried their hand at writing a Cormac McCarthy novel, and you understand who will enjoy this story.”

“For all horror fans, this is the latest—maybe greatest—novel to come from the mind of the frightening Nick Cutter to date….portraying images, as always, that stay in your mind and stop calm, peaceful sleep from coming."

“Nick Cutter’s Little Heaven is a sprawling epic that can stand alongside the best of 80's King, Barker, and McCammon. It pits the coolest and most unlikely bounty hunters against an old time religious cult and the ickiest creation this side of John Carpenter’s The Thing. Fun, nasty, smart, and scary, and in all the right places.”
— Paul Tremblay, acclaimed author of A Head Full of Ghosts

"Terrifying...The kind of horror that remains in the room of the reader. It's as if Nick Cutter spun a very human yarn into the myriad folds of a monster."
— Josh Malerman, acclaimed author of BIRD BOX

“Grafts Lovecraftian imagery onto a Neo-Western foundation, throwing in a cult subplot for good measure….A sprawling horror epic comparable to Stephen King's It. Nick Cutter has a similar affinity for pulp storytelling adapted on a grand scale....Cutter knows horror, and he nails the basics well enough to support ambitious plotting and refreshing genre experimentation.”

"Fans of unflinching bleakness and all-out horror will love this novel... Disturbing."

"If you aren't claustrophobic now, you will be after reading The Deep. Terror at its best!"
— Ania Ahlborn, bestselling author of Within These Walls and Seed

"Provides an unshakable haunting....Recommended for lovers of horror and books that make you question your sanity."

“THE TROOP scared the hell out of me, and I couldn't put it down. This is old-school horror at its best. Not for the faint-hearted, but for the rest of us sick puppies, it's a perfect gift for a winter night.”
— STEPHEN KING on THE TROOP

“Some thrillers produce shivers, others trigger goose bumps; Cutter's graphic offering will have readers jumping out of their skin…intense…packs a powerful punch….Readers may wish to tackle this heart-pounding novel in highly-populated, well-lit areas--snacks optional.”

"Resembling something like Deliverance as imagined by David Cronenberg."

Nick Cutter is a pseudonym for an acclaimed author of novels and short stories. He lives in Toronto, Canada.