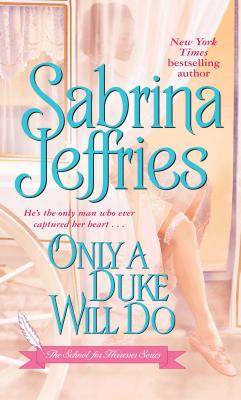 Only a Duke Will Do (The School for Heiresses #2) (Paperback)

"You can't avoid him forever, Louisa. Just tell him you're not interested, and put an end to it."
-- Mrs. Charlotte Harris, headmistress

Marry? Never! It would end Louisa North's work with her ladies reform group -- and truth be told, she likes her independence very much, despite her royal father's protests. So when Simon Tremaine, the dashing Duke of Foxmoor whom she once loved -- and had exiled from England -- returns bent on marrying her, she's skeptical. Does he truly care for her, or does he simply want revenge? It's difficult to resist Simon's dangerous charms, because the fire between them still burns as hot as ever. But when his ulterior motive for marriage is exposed, along with the deeply buried secrets of his past, Louisa vows to make him pay . . . and the price will be his heart.