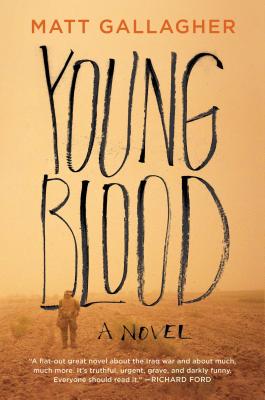 The Millions “Most Anticipated” Book of 2016

The US military is preparing to withdraw from Iraq, and newly-minted lieutenant Jack Porter struggles to accept how it’s happening—through alliances with warlords who have Arab and American blood on their hands. Day after day, Jack tries to assert his leadership in the sweltering, dreary atmosphere of Ashuriyah. But his world is disrupted by the arrival of veteran Sergeant Daniel Chambers, whose aggressive style threatens to undermine the fragile peace that the troops have worked hard to establish.

As Iraq plunges back into chaos and bloodshed and Chambers’s influence over the men grows stronger, Jack becomes obsessed with a strange, tragic tale of reckless love between a lost American soldier and Rana, a local sheikh’s daughter. In search of the truth and buoyed by the knowledge that what he finds may implicate Sergeant Chambers, Jack seeks answers from the enigmatic Rana, and soon their fates become intertwined. Determined to secure a better future for Rana and a legitimate and lasting peace for her country, Jack will defy American command, putting his own future in grave peril.

Pulling readers into the captivating immediacy of a conflict that can shift from drudgery to devastation at any moment, Youngblood provides startling new dimension to both the moral complexity of war and its psychological toll.

Praise For Youngblood: A Novel…

"On one level, the novel is a parable -- with overtones of Graham Greene's The Quiet American...On another, it's a story about how we tell stories to friends and strangers, trying to convey experiences they will never know firsthand, and how we tell ourselves stories to reckon with the past...Mr. Gallagher has a keen reportorial eye, a distinctive voice and an instinctive sympathy for the people he is writing about, and he uses those gifts here to immerse us in his characters's lives...With Youngblood, he has written an urgent and deeply moving novel."
— The New York Times

"Showcases the manifold strengths of the author's writing, most prominently a gift for evoking the feel of contemporary soldiering in faraway places ... Evocative and [written with] stirring sympathy for and surprising friendship with local civilians and soldiers."
— The Wall Street Journal

"[Gallagher] writes about war like you've never read before ... in its emotional nuance, Youngblood codifies the fact that this is a voice to be reckoned with."

"What’s needed in modern war lit is not more politics, but more humanity; less kill, and more consequence. Youngblood has both in spades."

"The Iraq Novel We've Been Waiting For. [A] dark, suspenseful meditation on [the] impact abroad ... America's first great work of reckoning."

"A powerful fiction debut…a gritty, tragic, realistic look inside the failures of America's invasion and occupation of Iraq told by someone who lived it.”
— The Huffington Post

"[Youngblood] represents powerful shift from Gallagher’s visceral, immediate nonfiction towards a thoughtful, moving story that nods towards something larger."

"Not only does Youngblood rank among the very best books of our seemingly endless Iraq war, it's one of the best novels I've ever read of war, period. A mystery as taut as that of any thriller lies at the heart of the story, and as the layers peel away and the mystery coils tighter and tighter, grim truths are revealed about love, loyalty, violence, power--about life in a very hard place made so much harder by years of war. Matt Gallagher's fierce, brilliant novel should serve as a slap in the face to a culture that's grown all too comfortable with the notion of endless war."
— Ben Fountain, New York Times bestselling author of Billy Lynn's Long Halftime Walk

"Youngblood airlifts readers into the Iraq War, and through Matt Gallagher’s eyes we find the place unsettlingly intimate, sublimely corporeal, ribald and gripping. With the promise of withdrawal shimmering on the horizon, Gallagher’s LT Jack is a mesmerizing narrator, the Charles Marlow of Iraq, urging our vessel deeper into a land of secrets and veils, deeper into the anarchic and ambivalent psyches of the men both occupying and being occupied. This muscular novel cements Gallagher’s role as our essential biographer of the forever war."

“‘iCasualties', 'electricity recons', and ‘Mesopotamian Cadillacs';’finding out on Facebook that your fiance’s dead. Gallagher humanizes these—war’s—alien and extraordinary elements. Youngblood is a beautiful book. It will break your heart.”
— Lea Carpenter, critically-acclaimed author of Eleven Days

"In 1926 Ernest Hemingway's first novel, The Sun Also Rises, portrayed the generation of men and women living in the wake of World War I, an unflinching portrait of their weaknesses and strengths. Matt Gallagher writes with much the same artistry and intent, this time illuminating the lives of men and women and children--American and Iraqi--trying to survive the war in Iraq. Youngblood is so good I couldn't help but think of old Hemingway's debut. Let this novel serve as your introduction to a bold, brilliant talent."
— Victor LaValle, author of The Devil in Silver

"A gripping, compelling novel about war and country by an exceedingly talented veteran of Iraq who writes with a soldier's eye and a poet's soul.  Youngblood is a captivating story of hope and loss, love and ruin that transports readers to the war as it was felt and lived - by Americans and Iraqis alike.  It clearly deserves a place on the top shelf of American war literature."
— General (Ret.) David H. Petraeus, commander of the 101st Airborne Division in Iraq (2003-2004), Multinational Security Transition Command-Iraq (2004-2005), Multinational Force-Iraq (2007-2008), and U.S. Central Command (2008-2010)