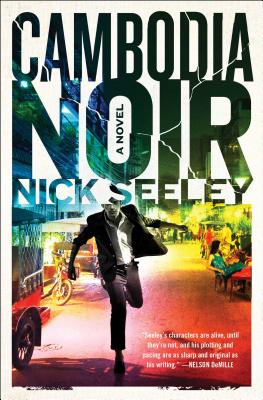 A “sinuous, shattering thriller” (Booklist, starred review) with a heart-stopping conclusion about a mysterious American woman who disappears in to the Cambodian underworld, and the photojournalist who tracks her through the clues left in her diary, by an author whose “plotting and pacing are as sharp and original as his writing” (Nelson DeMille).

Phnom Penh, Cambodia: Lawless, drug-soaked, forgotten—it’s where bad journalists go to die. For once-great war photographer Will Keller, that’s kind of a mission statement: he spends his days floating from one score to the next, taking any job that pays; his nights are a haze of sex, drugs, booze, and brawling. But Will’s downward spiral is interrupted by Kara Saito, a beautiful young woman who shows up and begs Will to help find her sister, June, who disappeared during a stint as an intern at the local paper. So begins Will’s “journey to the heart of drug-fueled noirness” (New York Journal of Books).

There’s a world of bad things June could have got mixed up in: the Phnom Penh underworld is in an uproar after a huge drug bust; a local reporter has been murdered in what looks like a political hit; and the government and opposition are locked in a standoff that could throw the country into chaos at any moment. Will’s best clue is her diary: an unsettled collection of experiences, memories, and dreams, reflecting a young woman at once repelled and fascinated by the chaos of Cambodia. As Will digs deeper into June’s past, he uncovers one disturbing fact after another about the missing girl and her bloody family history. In the end, the most dangerous thing in Cambodia may be June herself.

Propulsive, electric, and exotically enthralling, Cambodia Noir “has it all: sex, drugs, and mystery” (MetroUS). Debut author Nick Seeley “impresses on every count,” (BookPage, Top Mystery Pick) exploring what happens when we venture into dark places…when we get in over our heads…when we get lost. “If ever a case was made for place as character in a novel, Seeley makes it here with scene after nightmarish scene…This is distinctive work” (Kirkus Reviews).

Nick Seeley is an international journalist based over the past decade in the Middle East and Southeast Asia. His work has appeared in The Christian Science Monitor, Foreign Policy Magazine, Middle East Report, and Traveler’s Tales, among others. His fiction and criticism has been published in Strange Horizons. He is originally from Fairfax, Virginia. Cambodia Noir is his first novel.

Praise For Cambodia Noir: A Novel…

“Cambodia Noir is not for the faint-hearted. Nick Seeley’s debut novel takes the reader into the Inner Circle of Hell: Phnom Penh, Cambodia, a city of drugs, death, and violence. Seeley’s characters are alive, until they’re not, and his plotting and pacing are as sharp and original as his writing.”—Nelson DeMille

“The more dissolute photojournalist Will Keller looks for a disappeared young intern, the more he needs to watch his back. Monsoon-fueled Phnom Penh rumbles with murderous cops, an impending military coup, machete assassinations, and swerving motorbike rides on pitch-black roads. Nick Seeley’s Cambodia Noir is a mangrove swamp of a thriller you won’t put down. A terrific read.”--Jason Matthews, New York Times bestselling author of Red Sparrow and Palace of Treason

"When you think there is nothing new on the mystery scene, a debut blasts into your orbit and excites all the feelings that reading a great novel once bestowed. Imagine a Graham Greene of the zeitgeist, sprinkled with the audacity of John Burdett, fuelled,with a narrative reminiscent of the early Deaver or indeed King in his prime, and then add the finesse, the art of James Sallis and you have Cambodia Noir. It is that good, heartbreaking and brutal, insightful and deeply informative, as if Paul Theroux suddenly wrote an Ellroy homage. It strikes chords of all the great novelists. Best of all, it re-establishes noir as not only a serious and imaginative genre, but manages to place it in a whole new dimension of exciting possibilities."--Ken Bruen, award-winning author of The Guards

"How do you sum up a book as layered as Cambodia Noir? It's a riveting sequence of meticulously choreographed psychological strip teases. It's an eat-you-up-suck-you-in page turner. Cambodia Noir is refreshingly rich with human emotion and unsolvable problems. Seeley is an imaginative storyteller with a journalist's eye for detail. You feel that in every page of this bubbling cauldron of a book."--Caroline Kepnes, author of You

“International journalist Seeley’s debut novel puts the traditional noir story on ’roids… The fast-moving narrative is like riding through Phnom Penh’s streets on the back of a motorcycle…delivers an up-close, jarring look at a city rocked with unrest and an atmospheric take on that enduring noir protagonist, the dissolute foreign correspondent. A sinuous, shattering thriller.”--Booklist STARRED review

"A superb debut from a talent to watch in the coming years. It's quite a tale, one that sweeps the reader into peril and passion, all unraveling at the perfect pace. A treat from start to finish."--Steve Berry, New York Times Bestselling author of The Patriot Threat and The Templar Legacy

If ever a case was made for place as character in a novel, Seeley makes it here with scene after nightmarish scene...This is distinctive work. The plotting is wily and entertaining, the take on Cambodia, trenchant and disturbing.”--Kirkus Reviews

“Seeley gets Phnom Penh in the same way that John Burdett gets Bangkok, with descriptions so vivid that even if Seeley never mentioned the city by name, anyone who had ever spent time there would recognize it immediately. The thriller unfolds at a breakneck pace, with a backdrop of unrest and upheaval, and characters that blur (or totally obliterate) the lines between good and bad. Seeley impresses on every count.”--BookPage "TOP MYSTERY PICK"

“A compelling story of depravity and redemption with echoes of Twin Peaks and the bleakest works of Jim Thompson.”--Publishers Weekly “On the Radar” Debut Fiction Pick

"Nick Seeley’s Cambodia Noir is a tense and compelling neo-noir. This striking debut makes it clear that Seeley is a fine storyteller and a master of narrative voice. Highly recommended for readers looking for edgy and artfully crafted suspense."--Mark Wisniewski, author of Watch Me Go

"This thriller has it all: sex, drugs and mystery."--MetroUS

"[A] journey to the heart of drug-fueled noirness....Nick Seeley keeps the pace cranked up. The writing is crisp and edgy, staccato."--New York Journal of Books

“Propulsive, entertaining and slightly psychotic, Cambodia Noir is an enticing blend of politics, drugs and mayhem. This ambitious first thriller from Nick Seeley, a journalist who spent a decade in the Middle East and Southeast Asia, is not for the faint of heart. . . . Cambodia Noir is a fast-paced, surreal journey through an out-of-control nation…. A violent, unforgettable thriller.”--Shelf Awareness

"Reads like a dark collaboration between Graham Greene and Hunter Thompson, with a dash of a coherent Williams Burroughs thrown in. … I loved every word of this gorgeous, frightening work... It’s a drug that will stay in your system long after you think you’ve expelled it. And like a drug, it should come with a warning label. It’s that good.”--BookReporter