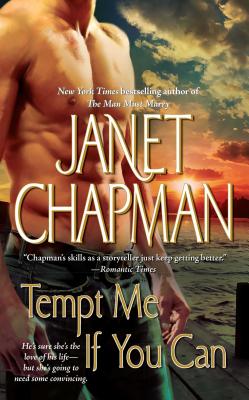 Tempt Me If You Can (Paperback)

The second book in the Sinclaire Brothers trilogy from Janet Chapman.

He’ll play by her rules until she falls for him...hook, line and sinker.

When an anonymous letter stuns shipping magnate and confirmed bachelor Ben Sinclair with the news that he has a teenage son, he's determined to make good on the past. But Emma Sands doesn't trust him.

The beautiful, fiery blonde has raised her nephew in the peaceful woods of Maine since he was five, and just because fifteen-year-old Michael is the spitting image of his tall, handsome father doesn't give Ben the right to march in and change their lives forever. Or so she thinks, until his return mysteriously unearths a dangerous small-town secret.

With Michael's help, Ben will do whatever it takes to prove to fiercely independent Emma that he can be the fearless protector she never knew she wanted... and the passionate lover she always thought she could resist.

A native of rural central Maine, Janet Chapman (1956–2017) lived in a cozy log cabin on a lake with her husband, three cats, and a stay young bull moose. The author of the hugely popular Highlander time-travel series, she also wrote numerous contemporary romances.
or support indie stores by buying on
Copyright © 2020 American Booksellers Association