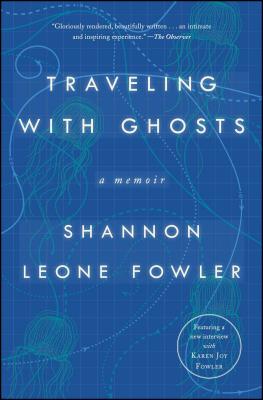 A “rich, unblinking” (USA TODAY) memoir that moves from grief to reckoning to reflection to solace as a marine biologist shares the solo worldwide journey she took after her fiancé suffered a fatal box jellyfish attack in Thailand.

In the summer of 2002, Shannon Leone Fowler was a blissful twenty-eight-year-old marine biologist, spending the summer backpacking through Asia with the love of her life—her fiancé, Sean. He was holding her in the ocean’s shallow waters off the coast of Ko Pha Ngan, Thailand, when a box jellyfish—the most venomous animal in the world—wrapped around his legs, stinging and killing him in a matter of minutes, irreparably changing Shannon’s life forever.

Untethered and unsure how to face returning to her life’s work—the ocean—Shannon sought out solace in a passion she shared with Sean: travel. Traveling with Ghosts takes Shannon on journeys both physical and emotional, weaving through her shared travels with Sean and those she took in the wake of his sudden passing. She ventured to mostly landlocked countries, and places with tumultuous pasts and extreme sociopolitical environments, to help make sense of her tragedy. From Oswiecim, Poland (the site of Auschwitz) to war-torn Israel, to shelled-out Bosnia, to poverty-stricken Romania, and ultimately, to Barcelona where she and Sean met years ago, Shannon began to find a path toward healing.

Hailed as a “brave and necessary record of love” (Ann Patchett, New York Times bestselling author of Bel Canto and Commonwealth) and “as intricate and deep as memory itself (Jane Hamilton, author of A Map of the World), Shannon Leone Fowler has woven a beautifully rendered, profoundly moving memorial to those we have lost on our journeys and the unexpected ways their presence echoes in all places—and voyages—big and small.

Shannon Leone Fowler is a marine biologist, writer, and single mother of three young children. Since her doctorate on Australian sea lions, she’s taught marine ecology in the Bahamas and Galápagos, led a university course on killer whales in the San Juan islands, spent a number of seasons as the marine mammal biologist on board ships in both the Arctic and Antarctic, taught graduate students field techniques while studying Weddell seals on the Ross Ice Shelf, and worked as a science writer at National Public Radio in Washington, DC. Originally from California, she currently lives in London. Traveling with Ghosts is her first book.
Loading...
or support indie stores by buying on