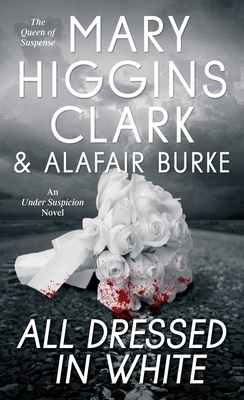 All Dressed in White

The second in the thrilling New York Times bestselling series from Mary Higgins Clark and Alafair Burke, follows television producer Laurie Moran as she investigates the cold case of a bride who went missing days before her wedding.

Five years ago, Amanda Pierce was excitedly preparing to marry her college sweetheart. She and Jeffrey had already battled through sickness and health, although their livelihoods looked set as Amanda was due to inherit her father’s successful garment company.

Then Amanda disappeared the night of her bachelorette party.

In present-day New York, Laurie Moran realizes a missing bride is the perfect cold case for her Under Suspicion television series to investigate. By recreating the night of the disappearance at the wedding’s Florida resort with Amanda’s friends and family, Laurie hopes to solve the case. Laurie and her Under Suspicion host Alex Buckley soon find themselves overwhelmed with theories and rumors about the “beloved” bride from those who were involved with the wedding, including Amanda’s former fiancé, a jealous sister, and plenty of playboy groomsmen.

One thing is certain, whoever was behind Amanda’s vanishing plans to keep the truth hidden “until death do they part.”

Praise For All Dressed in White: An Under Suspicion Novel…

Praise for All Dressed in White

“An explosive mix of family drama, secrets, rivalry, money and deception….A dandy whodunit with numerous plausible suspects, skillful misdirection, an exotic setting and smooth prose, it combines Clark’s skill at plotting romantic suspense with Burke’s edgier take on the genre. For those who enjoy escaping into a fine mystery, it’s the perfect hot read for chilly nights.”
— Richmond Times Dispatch

“[A] scintillating sequel…Clark and Burke's collaboration is as smooth as rum and coke, with just enough kick to make the reader thirsty for another."
— Publishers Weekly

“Fans will find plenty of intrigue and excitement in this contemporary thriller. . . . Clark keeps readers in suspense.”

“The snappy pace, layered characters, and many plot surprises will keep readers guessing in this fascinating mystery by two talented writers.”
— Booklist

“This serendipitous series launch will satisfy Clark’s legion of fans and may well win her some new ones.”
— Kirkus Reviews

“Seamless writing, sympathetic characters (and a few scoundrels), and brisk plotting. . . . Clark and Burke are entirely formidable on their own, but this new partnership proves that there’s something to be said for double trouble, which is a real treat for readers. . . . The Cinderella Murder is a winner.”
— Hartford Books Examiner

“The combination of Clark’s talent for suspense and Burke’s harder edge proves successful in this hot read about a cold case.”
— Richmond Times Dispatch

“A layered mystery that is sure to keep readers guessing until the end. . . . A surefire puzzle.”
— Bookreporter

Alafair Burke is the Edgar-nominated, New York Times bestselling author of twelve novels, including The Wife, The Ex, If You Were Here, Long Gone, and the Ellie Hatcher series. A former prosecutor, she is now a professor of criminal law and lives in Manhattan.
Loading...
or support indie stores by buying on