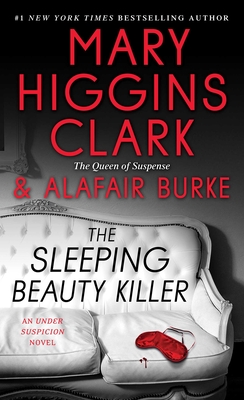 The Sleeping Beauty Killer (An Under Suspicion Novel)

The third thrilling novel in the Under Suspicion series by #1 New York Times bestselling author and “Queen of Suspense” Mary Higgins Clark and Alafair Burke follows television producer Laurie Moran as she tries to help a woman she believes was wrongfully convicted of killing her fiancé.

Fifteen years after being convicted of murdering her fiancé—the famed philanthropist Hunter Raleigh III—Casey Carter is determined to clear her name. Though she has served her time, she finds that she is still living under suspicion. Going on the true crime show Under Suspicion seems to be her only hope to prove her innocence.

The show’s producer, Laurie Moran, also believes in her innocence and wants to help Casey. But with Alex Buckley taking a break from the show—cooling his potential romance with Laurie—Under Suspicion introduces a new on-air host in Ryan Nichols, a hot shot legal whiz with a Harvard Law degree, a Supreme Court clerkship, experience as a federal prosecutor. Ryan has no problems with steering the show, and even tries to stop Laurie from taking on Casey’s case because he’s so certain she’s guilty.

An egomaniacal new boss, a relentless gossip columnist, and Casey’s longstanding bad reputation: Laurie must face this and more to do what she believes is right, to once and for all prove Casey’s innocence—that is, if she’s innocent.

Alafair Burke is the Edgar-nominated, New York Times bestselling author of twelve novels, including The Wife, The Ex, If You Were Here, Long Gone, and the Ellie Hatcher series. A former prosecutor, she is now a professor of criminal law and lives in Manhattan.
or support indie stores by buying on