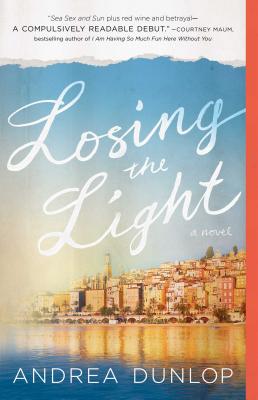 “A heady cocktail of nostalgia, a seductive Frenchman, a passionate love triangle, and a mysterious disappearance.” —The Seattle Times

A smart, obsessive debut novel about a young woman studying abroad who becomes caught up in a seductive French world—and a complex web of love and lust.

When thirty-year-old Brooke Thompson unexpectedly runs into a man from her past, she’s plunged headlong into memories she’s long tried to forget about the year she spent in France following a disastrous affair with a professor.

As a newly arrived exchange student in the picturesque city of Nantes, young Brooke develops a deep and complicated friendship with Sophie, a fellow American and stunning blonde, whose golden girl façade hides a precarious emotional fragility. Sophie and Brooke soon become inseparable and find themselves intoxicated by their new surroundings—and each other.

But their lives are forever changed when they meet a sly, stylish French student, Veronique, and her impossibly sexy older cousin, Alex. The cousins draw Sophie and Brooke into an irresistible world of art, money, decadence, and ultimately, a disastrous love triangle that consumes them both. And of the two of them, only one will make it home.

Praise For Losing the Light: A Novel…

"Who doesn't fantasize about a sexy and passionate romance with a hot foreigner?"
— PopSugar

"A complicated friendship, a disastrous affair with a professor, and intoxicating relationships factor in making this an unforgettable trip."
— Buzzfeed

"A haunting story of betrayal within a beautiful portrait of youth."
— Kirkus Reviews

"Dunlop’s smart and suspenseful debut follows the lead of Katie Crouch’s Abroad (2014) and Jennifer duBois’ Cartwheel (2013), but delves more deeply into the repercussions beyond a shocking incident during a year abroad. Dunlop richly evokes the heady emotions of friendship, lust, and betrayal."
— Booklist

“Dunlop’s writing is effervescent, but wise…the story, which is as much about love, lust and longing as it is about the intricacies and potential pitfalls of close, obsessive friendship, also offers a truly lovely depiction of France.”
— Globe and Mail

"In her debut, Dunlop writes of a fizzy, decadent world, filled with the intense relationships that young love brings, whether that feeling is for a person or for a beautiful location."
— Library Journal

"Love triangles can haunt you forever. This gorgeously written debut novel centers around one woman being seduced by European high life while on a study abroad trip in France. It's an exotic escape and a literary escape at the same time."
— Redbook

"The story of a young girl studying abroad in France who gets sucked into a world of love and lust. This unraveling tale is absolutely haunting."
— SheKnows

"Good wine, dark chocolate, a French love triangle, and the perfect best friend- at first- are only a handful of the decadences awaiting you in Losing the Light- not to mention the shocking twist that kept this succulent debut lingering long after the final page."
— Miranda Beverly-Whittemore

"Andrea Dunlop's captivating debut ardently delivers the thrill and joy and exquisite pain of being young and in love: with a friend, with a lover, with a country, with a life, with the future. I felt myself twenty and in France with nothing but heady enchantment before me. Losing the Light is utterly transporting."

"It's got Gainsbourg's ‘Sea, Sex, and Sun’ plus red wine and betrayal—a compulsively readable debut about forever friendships that can't last."
— Courtney Maum

"Losing the Light is a smart, sexy, thrilling novel. Andrea Dunlop's debut brilliantly captures the tension and sharp edges of female friendships, infatuation, and life abroad. You will feel transported to France, as if you yourself are speaking French and drinking a little too much wine with your best friend and a dangerously handsome man."
— Taylor Jenkins Reid

"There are so many coming-of-age novels in the world about the young, innocent girl making her way in the world. And yet, Losing the Light is really something special. Andrea Dunlop has a keen sense of what a modern woman on the cusp of her twenties might truly desire, fear, and be tempted by. Her characters are unapologetic and troublesome, yet intensely likable. On top of that, she sets the book in a French town and feeds you wine and men the whole way through. Oh, and there’s a murder mystery. Seduced yet? You should be. This is a lovely debut."
— Katie Crouch

“A heady cocktail of nostalgia, a seductive Frenchman, a passionate love triangle, a mysterious disappearance: Seattle author Andrea Dunlop weaves an intriguing story about 30-year-old Brooke, now newly engaged,and her recollections of student days a decade earlier in France with her bubbly, blond buddy Sophie...Losing the Light is a love letter to France — the cafes, the language, the 'fierce elegance' of Parisiennes, the sun-drenched beauty of Cap Ferrat. Dunlop brilliantly recreates the tempestuous, 'anything is possible' whirlwind of emotions that accompany Brooke’s coming of age, with the dizzying heights and depths of feeling...A thoughtful, assured debut.”

“This delicious literary indulgence is consuming and addictive…the perfect partner for every beach day this summer.”
— Sunset Magazine

Andrea Dunlop is the author of We Came Here to Forget, She Regrets Nothing, Losing the Light, and Broken Bay. She lives with her husband in Seattle, Washington, where she works as a social media consultant.
Loading...
or
Not Currently Available for Direct Purchase