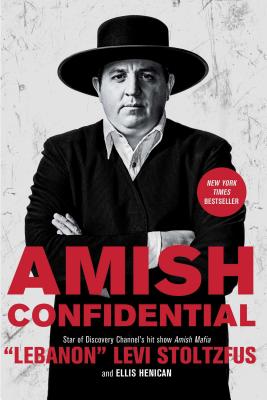 Go behind the beards in this daring insider’s look at the curious Amish subculture of Pennsylvania Dutch Country!

Is the “plain and simple” life really so plain and simple? How do the Amish live without cars? Electricity? NFL football? The truth is, they don’t. More than fifty million people have watched “Lebanon” Levi Stoltzfus in Discovery Channel’s hit show Amish Mafia, where he dispenses justice and keeps the peace among the seemingly quiet, insular Amish people of Lancaster, Pennsylvania. Now, he reveals what it’s really like to be Amish. Not the buggies, bonnets, and beards image the tight-knit community has portrayed for hundreds of years to the relentless curiosity of outsiders. The real-deal, day-to-day life—the good and the bad—all the dirty little secrets you’re not supposed to know. From Wi-Fi “pleasure huts,” to prostitutes, to marijuana and cocaine, you’ll never look at the Amish the same.

It isn’t easy keeping your feet planted firmly in the 1800s when the rest of the world is centuries ahead. Not even for the most God-fearing among us. The Amish have their own unique way of doing everything, and the lengths they will go to indulge in modern conveniences—and hide their indiscretions—will shock you. What have you been dying to know? How about what really happens when someone is shunned? Or whether the Amish pay taxes? Do they ever try to “pass” as English (in other words, non-Amish)? How rampant is illicit sex in such a repressed society? Can individuals make themselves stand out despite the strict rules? Why would the Amish take such risks when the punishment is eternal damnation?

“Lebanon” Levi blows the top off the buggy with this scandalous insider’s exposé, proving that even the Amish don’t always practice what they preach.

“Lebanon” Levi Stoltzfus is the star of Discovery Channel’s hit show Amish Mafia. He was raised Old Order Amish (the most traditional kind), speaking Pennsylvania Dutch in Pennsylvania’s rural Lancaster and Lebanon counties. The Ordnung, the Amish code of conduct, does not prevent him from speaking freely about the closed society because he was never baptized into the church.

Ellis Henican is a newspaper columnist, a television commentator, and the coauthor of five New York Times bestsellers, including Damn Few.
Loading...
or support indie stores by buying on