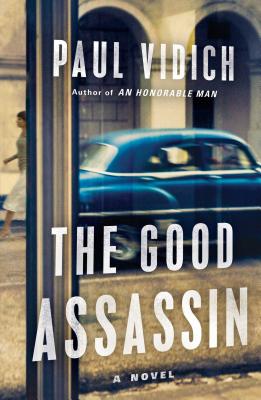 “The Good Assassin opens up Hemingway’s Cuba. Possessing Alan Furst’s attention for period detail and the deft character touches of John Le Carré, Vidich has quickly carved out a place for himself among the very first rank of espionage writers. It’s a masterful effort and the author’s best work to date.”—Michael Harvey, New York Times bestselling author of The Chicago Way

“The Good Assassin is first-rate literary espionage . . . Author Paul Vidich has evoked not only the intrigue and brutality of Batista’s Cuba, but the island itself . . . a masterful work of noir fiction.”—Susan Isaacs, New York Times bestselling author of A Hint of Strangeness

Paul Vidich follows up his acclaimed debut spy thriller with a suspenseful tale of Cold War espionage set in 1950s Cuba, as foreign powers compete to influence the outcome of a revolution.

Former CIA Agent George Mueller arrives in Havana in August 1958—the last months before the fall of Cuban dictator Fulgencio Batista—to look into the activities of Toby Graham, a CIA officer suspected of harboring sympathies for the rebel forces fighting the unpopular Batista regime. Mueller knew Graham as an undergraduate and later they were colleagues in Berlin fighting the Soviet NKVD. Under the guise of their long acquaintance Mueller is recruited to vet rumors that Graham is putting weapons, covertly provided by the CIA to Batista, into the hands of Castro’s forces. Public exposure of the CIA weapons mission, and the activity of one rogue agent, threaten to embarrass the agency.

Mueller uncovers a world of deceit as the FBI, CIA, and State Department compete to influence the outcome of the revolution in the face of the brutal dictatorship’s imminent collapse. Graham, meanwhile, is troubled by the hypocrisy of a bankrupt US foreign policy, and has fallen in love with a married American woman, Liz Malone.

Paul Vidich has written a powerful story of ideals, passions, betrayals, and corrupting political rivalries in the months before Castro’s triumphant march into Havana on New Year’s Day 1959. This sequel showcases the widely praised talents of Paul Vidich, who Booklist says, “writes with an economy of style that acclaimed novelists might do well to emulate.”

"Fascinating...Vidich brings the reader into a country on the brink of revolution. The fear and danger are palpable."
— Historical Novel Society

"Vidich is a star in the making. His books have more of a slow-burn to them and are definitely classic espionage thrillers."
— The Real Book Spy, Binge-Worthy New Series that All Thriller Fans Should be Reading
or
Not Currently Available for Direct Purchase
Copyright © 2020 American Booksellers Association