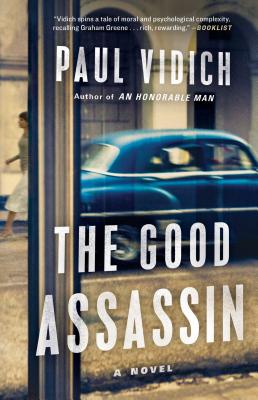 “The Good Assassin opens up Hemingway’s Cuba. Possessing Alan Furst’s attention for period detail and the deft character touches of John Le Carré, Vidich has quickly carved out a place for himself among the very first rank of espionage writers. It’s a masterful effort and the author’s best work to date.” —Michael Harvey, New York Times bestselling author of The Chicago Way

“The Good Assassin is first-rate literary espionage…Author Paul Vidich has evoked not only the intrigue and brutality of Batista’s Cuba, but the island itself…a masterful work of noir fiction.” —Susan Isaacs, New York Times bestselling author of A Hint of Strangeness

Former CIA Agent George Mueller arrives in Havana in August 1958, during the last months of dictator Fulgencio Batista’s reign, to look into the activities of Toby Graham—an in-country CIA officer suspected of harboring sympathies for the rebels fighting the unpopular Batista regime. Specifically, Mueller’s old friend Graham may be putting weapons into the hands of Castro’s forces, in bold defiance of the United States arms embargo on the island.

But when Mueller uncovers a world of deceit as the FBI, CIA, and State Department compete to influence the outcome of the revolution in the face of the brutal dictatorship’s imminent collapse, he realizes that nothing and no one is what they seem.

This is a powerful story of ideals, passions, betrayals, and corrupting political rivalries in the months before Castro’s march into Havana on New Year’s Day, 1959. As New York Times bestselling author Michael Harvey raves, “It’s a masterful effort and the author’s best work to date.”

"THE GOOD ASSASSIN opens up Hemingway’s Cuba. Possessing Alan Furst’s attention for period detail and the deft character touches of John Le Carré, Vidich has quickly carved out a place for himself among the very first rank of espionage writers. It’s a masterful effort and the author’s best work to date."
— Michael Harvey, New York Times bestselling author of THE CHICAGO WAY and BRIGHTON

Paul Vidich has had a distinguished career in music and media. Most recently, he served as Special Advisor to AOL, Inc. and was Executive Vice President at the Warner Music Group, in charge of technology and global strategy. He serves on the Board of Directors of Poets & Writers and The New School for Social Research. A founder and publisher of the Storyville App, Vidich is also an award-winning author of short fiction. He is the author of An Honorable Man and The Good Assassin.
Loading...
or support indie stores by buying on
(This book is on backorder)