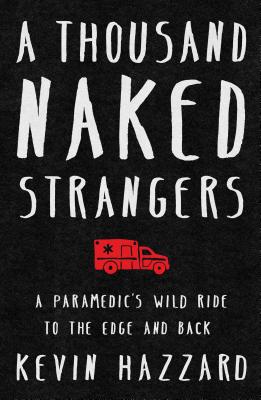 A Paramedic's Wild Ride to the Edge and Back

A former paramedic’s visceral, poignant, and mordantly funny account of a decade spent on Atlanta’s mean streets saving lives and connecting with the drama and occasional beauty that lies inside catastrophe.

In the aftermath of 9/11 Kevin Hazzard felt that something was missing from his life—his days were too safe, too routine. A failed salesman turned local reporter, he wanted to test himself, see how he might respond to pressure and danger. He signed up for emergency medical training and became, at age twenty-six, a newly minted EMT running calls in the worst sections of Atlanta. His life entered a different realm—one of blood, violence, and amazing grace.

Thoroughly intimidated at first and frequently terrified, he experienced on a nightly basis the adrenaline rush of walking into chaos. But in his downtime, Kevin reflected on how people’s facades drop away when catastrophe strikes. As his hours on the job piled up, he realized he was beginning to see into the truth of things. There is no pretense five beats into a chest compression, or in an alley next to a crack den, or on a dimly lit highway where cars have collided. Eventually, what had at first seemed impossible happened: Kevin acquired mastery. And in the process he was able to discern the professional differences between his freewheeling peers, what marked each—as he termed them—as “a tourist,” “true believer,” or “killer.”

Combining indelible scenes that remind us of life’s fragile beauty with laugh-out-loud moments that keep us smiling through the worst, A Thousand Naked Strangers is an absorbing read about one man’s journey of self-discovery—a trip that also teaches us about ourselves.

Kevin Hazzard worked as a paramedic from 2004 to 2013, primarily at Grady Hospital in Atlanta. His freelance journalism has appeared in Atlanta Magazine, Marietta Daily Journal, Creative Loafing, and Paste. He is the author of a novel, Sleeping Dogs, and A Thousand Naked Strangers. He and his family live in Hermosa Beach, California.

Praise For A Thousand Naked Strangers: A Paramedic's Wild Ride to the Edge and Back…

“A wild, winding ride...Think gonzo journalism meets emergency room noir…[Hazzard's] transformation from a fear-paralyzed teenager to an adult in control is as gripping as it is violent.”
—The Washington Post

“A gripping account…Hazzard is just the kind of human being you hope would come to your rescue.”
—BookPage

“It’s Hazzard’s insight into life’s foibles and his skill as a writer that allow the reader to share his experiences and marvel at what often greets emergency medical technicians when they answer a call…There’s gore...There’s empathy…There’s even humor.”
—The Buffalo News

“Hazzard’s unblinking view of chaos is not for weak stomachs, but it’s variously raw, poetic, and profoundly hopeful.”
—Publishers Weekly

“A thrilling, captivating, and sometimes grisly glimpse into what it takes to be a first responder...frank and morbidly funny.”
—Booklist

“No one has a closer view into our fearful hearts than the paramedic, and no one writes it like Kevin Hazzard. He's given us a deep intimate portrait of the toll it takes to every day witness our most vulnerable moments.”
—Joe Connelly, author of Bringing Out the Dead

“Hazzard excels at the small yet unforgettable details: what appears in the tread of his shoe, what scatters onto the floor of his ambulance. You'll begin this journey as a guilty voyeur, seeing things you really shouldn't, but, by the end, be transformed.”
—Katrina Firlik, author of Another Day in the Frontal Lobe