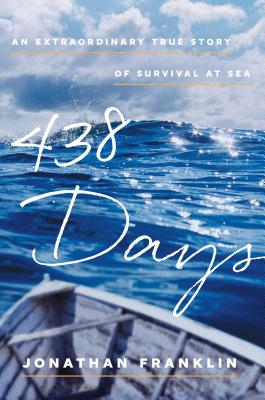 An Extraordinary True Story of Survival at Sea

“The best survival book in a decade” (Outside magazine), 438 Days is the true story of the fisherman who survived fourteen months in a small boat drifting seven thousand miles across the Pacific Ocean.

On November 17, 2012, a pair of fishermen left the coast of Mexico for a weekend fishing trip in the open Pacific. That night, a violent storm ambushed them as they were fishing eighty miles offshore. As gale force winds and ten-foot waves pummeled their small, open boat from all sides and nearly capsized them, captain Salvador Alvarenga and his crewmate cut away a two-mile-long fishing line and began a desperate dash through crashing waves as they sought the safety of port.

Fourteen months later, on January 30, 2014, Alvarenga, now a hairy, wild-bearded and half-mad castaway, washed ashore on a nearly deserted island on the far side of the Pacific. He could barely speak and was unable to walk. He claimed to have drifted from Mexico, a journey of some seven thousand miles.

438 Days is the first-ever account of one of the most amazing survival stories in modern times. Based on dozens of hours of exclusive interviews with Alvarenga, his colleagues, search-and-rescue officials, the remote islanders who found him, and the medical team that saved his life, 438 Days is an unforgettable study of the resilience, will, ingenuity and determination required for one man to survive more than a year lost and adrift at sea.

Praise For 438 Days: An Extraordinary True Story of Survival at Sea…

“The best survival book in a decade."
— Outside

“A spectacular triumph of grit over adversity, 438 Days is an intense, immensely absorbing read.”
— Booklist

"A fascinating, action-packed account of long-term survival on the open seas."

"Jonathan Franklin is an American journalist, but it is with a novelist’s eye for detail, rather than a reporter’s matter-of-factness, that he gives this gripping saga the chronicle it deserves...it unfolds like a rollicking adventure story...remarkable...reminded me of both Yann Martel’s Life Of Pi and William Golding’s Pincher Martin, yet tells a tale that is nothing if not astoundingly, engrossingly singular."
— Daily Mail (UK)

“This riveting adventure has us in its grip, spellbound and eager to know more about the mysterious Salvador Alvarenga…His story of resilience, ingenuity, and grit is an unforgettable true-life adventure."
— BookPage

"As this old world pursues its endless journey round the sun, many are the tales of death and disaster on the high seas. Few indeed are those that tell of near-miraculous survival, fed by human courage, faith, strength and intelligence. This is one such."
— Roanoke Times

Jonathan Franklin regularly reports for The Guardian, VICE, and Esquire. He also works with the team at Retro Report producing documentaries broadcast by The New York Times. Based in Santiago, Chile, and Manhattan, Franklin reports on Latin America. Franklin’s previous book 33 Men, the exclusive account of Chilean miners trapped nearly a kilometer underground, became a national bestseller in the US and UK and was translated into nineteen languages. He can be contacted @FranklinBlog and JonathanFranklin.com.
Loading...
or
Not Currently Available for Direct Purchase