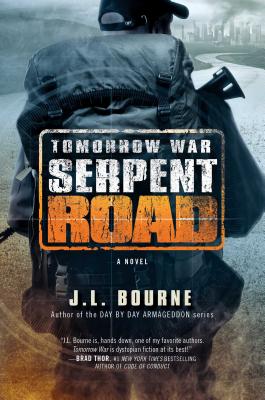 Serpent Road: A Novel (The Chronicles of Max #2)

A riveting, ultra-realistic example of “dystopian fiction at its best” (Brad Thor, #1 New York Times bestselling author) from the acclaimed author of the Day By Day Armageddon novels!

During an unacknowledged mission inside the Syrian border, a government operative had unwittingly triggered an incredible worldwide event that irrevocably shaped the future of the United States. In the aftermath of the crisis, families have struggled to survive in a world short on food, water, and electricity. Hyperinflation cripples the United States economy and post-war armored military vehicles are patrolling the streets. One man has now stepped forward and continues to push back the dark wave of tyranny brought on by martial law in the streets of America, and may be the only hope of saving liberty for the country’s future.

Praise For Tomorrow War: Serpent Road: A Novel (The Chronicles of Max #2)…

"Fans of near-future dystopian fiction in which isolated warriors fight against a tyrannical U.S. government will welcome Bourne's exciting sequel to Tomorrow War....For readers into this subgenre, this will go down as smoothly as a cold beer on a hot day."
— Publishers Weekly, on TOMORROW WAR: SERPENT ROAD

"J.L. Bourne is, hands down, one of my favorite authors. Tomorrow War is dystopian fiction at its best! This book is so real, it scared the hell out me. Read it today and pray to God it doesn't come true tomorrow."
— BRAD THOR, #1 New York Times bestselling author of USE OF FORCE, on TOMORROW WAR

"A nonstop action thriller that explores the dark side of 'what if our entire digital and economic grid collapsed.' An unforgettable novel."
— SCOTT McEWEN, #1 New York Times bestselling co-writer of AMERICAN SNIPER and TARGET AMERICA, on TOMORROW WAR