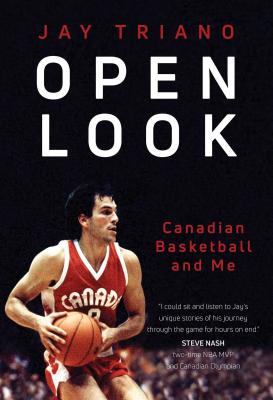 Canadian Basketball and Me

A thoughtful, entertaining memoir about one of Canada’s most decorated basketball stars, his love of the sport, and the rise of basketball in Canada.

As a child growing up in Niagara Falls, Ontario, Jay Triano did what everyone else in the city did on Friday nights: he went to watch basketball. Along with dozens of other fans, Jay and his family would crowd into the gymnasium of the local high school. Of all the places in the world, Jay only ever wanted to be courtside, surrounded by the game he loved with the roar of the crowd behind him.

Jay never lost that passion for the game. A talented basketball player, Jay competed at the highest levels of the sport. He broke school records, traveled the world with the national team, and twice played against some of basketball’s biggest stars at the Olympics, all in the hopes of one day becoming a professional athlete. But the road wasn’t always smooth. Basketball was in its infancy in Canada, and Jay’s options were limited. Jack Donohue, the imposing forefather of the national game in Canada, held the fortunes of many players in his hands, and he tested the mettle of those around him. Throughout it all, Jay’s love of the sport drove him onward.

As Jay matured, so too did the game of basketball in Canada, from humble origins in quiet communities to international competitions and the peak of the professional game. Along the way, Jay drew inspiration from the remarkable people in his life. When he was playing at university, Jay’s trainer was a young man named Terry Fox, who showed Jay the true meanings of discipline, gratitude, and giving back. Years later, when Jay was coaching Olympic and NBA teams, it was those same lessons that helped him realize that he wasn’t just shaping athletes; he was shaping a new generation.

Told with honesty, warmth, and passion, Jay Triano’s story is an uplifting reminder of what it means to love a sport and a country.

Praise For Open Look: Canadian Basketball and Me…

“Some of my greatest basketball memories are playing for Jay Triano. Jay is not only a phenomenal coach, but a basketball lifer whose insights and experiences are incredible.  I could sit and listen to Jay’s unique stories of his journey through the game for hours on end.”
— Steve Nash, two-time NBA MVP, eight-time NBA All-Star, and Canadian Olympian

“The first non-American ever to coach a USA team and to win a gold medal, Jay Triano is a coach’s coach.  Open Look is an uplifting story of a life in basketball, what the game can give us, and what it can teach us about giving back."
— Mike Krzyzewski, Duke University Head Basketball Coach and former United States National Team Head Coach (2005-16)

“Open Look is a love story. Jay’s love for basketball and for Canada shine through. His positive attitude and his passion for the game of basketball were invaluable to me and my team.  You will feel the same way after reading his story.”
— Terry Stotts, head coach of the Portland Trail Blazers

Jay Triano is the former head coach of the Phoenix Suns and Toronto Raptors. Born and raised in Niagara Falls, Ontario, he attended school at Simon Fraser University, where he broke or equaled eleven school basketball records. Triano is a former captain of the Canadian men’s national basketball team, with whom he competed in two Olympics, and currently serves as the team’s head coach.
Loading...
or
Not Currently Available for Direct Purchase