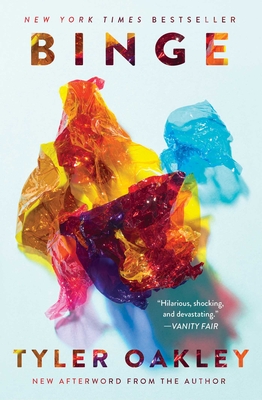 For someone who made a career out of over-sharing on the Internet, Tyler has a shocking number of personal mishaps and shenanigans to reveal in his first book: experiencing a legitimate rage blackout in a Cheesecake Factory; negotiating a tense stand­off with a White House official; crashing a car in front of his entire high school, in an Arby’s uniform; projectile vomiting while bartering with a grandmother; and so much more. In Binge, Tyler delivers his best untold, hilariously side-splitting moments with the trademark flair that made him a star.

"Oakley has managed to produce a quick read of tales to make you laugh, cry, ponder and cringe...a worthy debut and one that will captivate and comfort existing fans of the Internet celebrity, while helping him gain new ones."
— New York Daily News

"With a confident voice and clear message, Oakley blends giggle-inducing humor with serious discussions of his personal battles...an accurate reflection of the man himself."
— Out Magazine Online

"Oakley uses his unique perspective on YouTube to write a touching and timely book. In “Binge,” already a New York Times bestseller, readers find Oakley at his realest."
— Salon Online

"I devoured [Binge]...I think you’ll find it as hard to put down as I did. You might be shocked at times, but in the end you’ll walk away loving him even more."
— Pop Culture Beast

"With his first book, Binge, Oakley takes apart the smiling, genial celebrity and shares some harrowing stories of poverty, addiction, abuse, and redemption... This book isn’t a tale of regrets but of survival – it’s a book that celebrates misfits and weirdos and imparts a message of hard-won appreciation of life."
— A Crowded Bookshelf

"Of all the books released by YouTube vloggers, Binge might be the most brutally honest yet."
— International Business Times

"[Binge] explores every emotion: you will laugh, then you will cry for sure too, you will gasp and you will be terrified, and then you will have too many emotions and will want to stab the book and throw it out of your window! (But you will not actually do it because by that time the book will be very dear to you.)...very meaningful and a fun voyage."
— The Guardian

Michigan native and pop-culture tastemaker Tyler Oakley has amassed more than twenty-four million social media followers through his humorous, no-holds-barred YouTube videos, high-profile interviews, and social rights advocacy. After uploading his first video eight years ago, Oakley took the Internet by storm. With successes ranging from interviews with First Lady Michelle Obama, One Direction, and Ellen DeGeneres, a worldwide live tour, and his chart-topping podcast Psychobabble, Oakley is an Internet icon. He lives in Los Angeles, California, where he uploads weekly videos from his living room.
Loading...
or
Not Currently Available for Direct Purchase